Eddie Hearn: Oleksandr Usyk will be encouraged to go big

Posted by Vincent Henderson on November 26, 2018 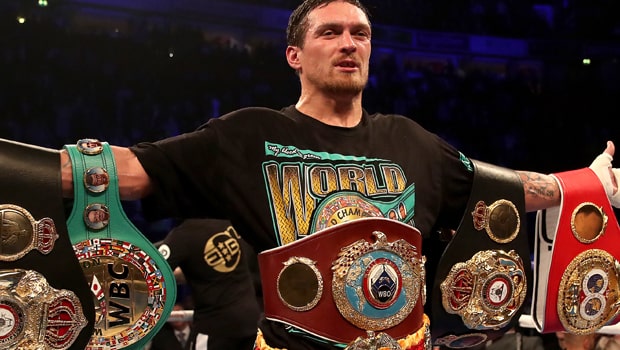 Promoter Eddie Hearn insists undisputed champion Oleksandr Usyk will be urged to target ‘major heavyweight fights’ instead of staying down at cruiserweight.

The Ukrainian star has hinted that he will move up a weight following his destructive knockout victory over Tony Bellew earlier this month.

Usyk defended his four cruiserweight title thanks to a thrilling eighth-round stoppage in Manchester but he has yet to confirm his next move.

He has already signed a deal with Matchroom Promotions and he could soon be fighting stablemate Anthony Joshua who currently rules the heavyweight division.

The 31-year-old will be looking to make history by winning world titles at both weights and Hearn sees no future at cruiserweight.

“Ultimately if he talks about the likes of Joshua, he needs to move into those realms of opponents and size, sooner rather than later,” Hearn told Sky Sports.

“He is 31, so he’s a spring chicken in terms of miles on the clock in the professional game, but he’s good enough to go on and mix it with those top heavyweights now.

“You look at the opponents for Usyk at heavyweight – Jarrell Miller, Dillian Whyte, Derek Chisora, Adam Kownacki, Luis Ortiz. There’s so many fights for him at heavyweight that he could jump straight into.

Hearn said: “I still think he’ll move to heavyweight, because if he doesn’t, who are the fights?”