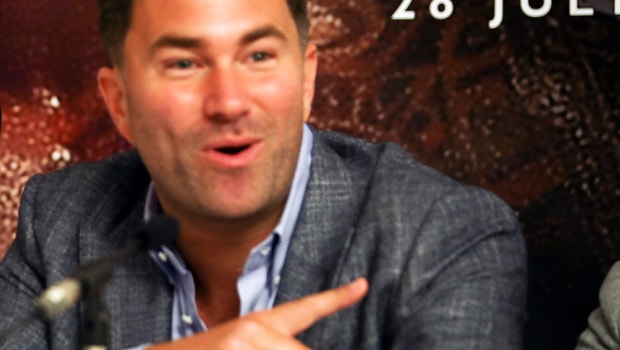 Promoter Eddie Hearn is excepting big things from Lewis Ritson and Josh Kelly after the pair won on his Newcastle bill on Saturday night.

Ritson made history as he won the British Lonsdale belt outright after defending it for a third successive time.

The Newcastle native was expected to be tested by Paul Hyland Jr but he floored him on three occasions in the opening round and secured the stoppage inside the first three minutes.

Ritson now gets to keep the title and he extended his winning run to 16 fights.

After nearly quitting 12 months ago he has now kicked on and Hearn says the world is his oyster.

“We don’t know where this story ends. He doesn’t know what he has got but I haven’t heard an atmosphere like that for a long time “European titles, world titles, we dream big.

There’s a lot of work to do but we are going to give it 100%.” Kelly won the Commonwealth title from Australia’s Kris George after controlling the majority of the fight.

George was bell behind on the cards when he retired hurt after the seventh round, with reports claiming he has broken his right hand.

Kelly looks set to be fast tracked through the belts and Hearn admits he needs to improve the level of opponent.

He added: “His trainer Adam Booth wants to move him fast and he is going to need those challenges.

“He’s just won the Commonwealth title without breaking sweat. He will need to be tested and then that’s where you’ll see his class come out.”