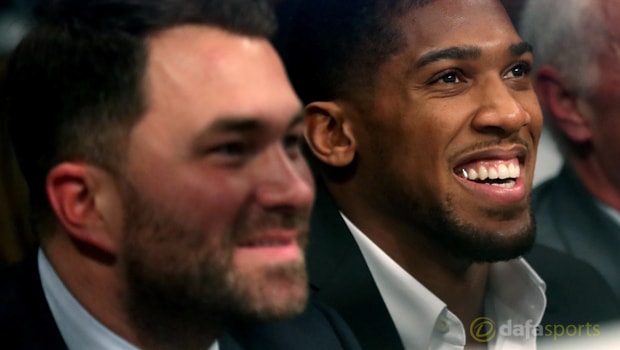 Promoter Eddie Hearn insists Anthony Joshua isn’t looking past Joseph Parker but claims the Briton is desperate to set up a bout with Deontay Wilder.

The likely path for the victor is a fight with Wilder, who had to show some grit to overcome Luis Ortiz in New York on March 3, at some point later this year.

Joshua and WBC champion Wilder have been exchanging verbals for a while and the undefeated American is set to be ringside in Wales.

Hearn admits that his man still has to a big obstacle to overcome when he faces Parker but insists the Olympic gold medallist is desperate to take on Wilder.

“I’d like to see the Wilder fight next,” said Hearn.

“As far as I’m concerned Parker is a very difficult fight for Joshua, so we’re not really looking beyond that but, obviously, we want the Wilder fight.

Joshua wants to be the undisputed heavyweight world champion. To do it we have to beat Wilder.

Joshua is priced at 1.11 to extend his unbeaten record, while Parker can be backed at 7.00 to triumph, and the draw is available at 26.00.