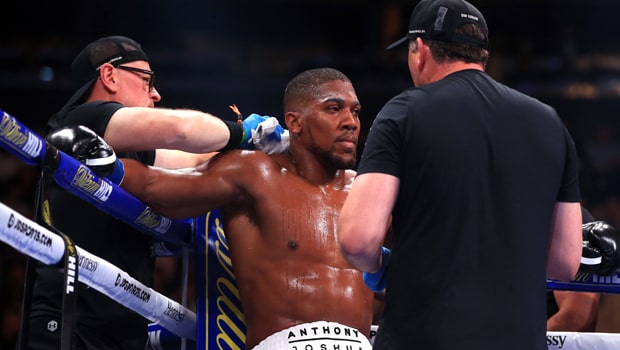 Hearn expects the bout will take place in either November or December in England. Ruiz Jnr caused one of the biggest upsets in heavyweight history on Saturday night at New York’s Madison Square Garden when he claimed the IBF, WBA and WBO heavyweight belts from previously undefeated Joshua.

The Briton was heavy favourite to win, but was knocked down for the first time in his career by Ruiz Jnr in the third round. Joshua failed to recover and lacked his normal composure from that point.

He ended up on the canvas four times, ultimately resulting in the fight being stopped in round seven.

The contract for their New York showdown included a rematch clause in the event that Ruiz Jnr won and that is likely to be exercised before year-end.

Joshua had already planned to fight again later in the year had he won and that hasn’t changed, says Hearn. After an unsuccessful first outing in the United States, the rematch is destined for the UK.

“We didn’t know what was coming next, in November, December, now we do,” said Hearn.

“But there’s a lot of pressure on that fight; the rematch is huge. “For me, it should be the UK, but we’ll sit down as a team and look at everything.

“I know it didn’t go our way but we said we wanted to create a night that people would remember for a long time; unfortunately they’ll remember it for a shock defeat and an incredible night of boxing. “But that’s OK; revenge will be sweet and I believe he’ll get it.”