No doubting Carl Froch this time 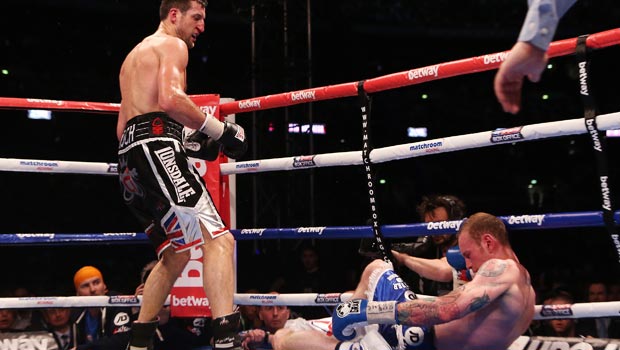 Carl Froch retained his IBF and WBA super-middleweight titles once again against bitter rival George Groves but there was no controversy at Wembley on Saturday night this time around, just a thunderous right hand.

The hype in the build-up to this fight had been intense, perhaps fuelled by the manner of the climax to the first bout, with many pundits suggesting that the referee had been too quick to step in.

Groves ultimately got his wish for a rematch and in front of 80,000 fans at Wembley, as well as many more on box office television, it was the challenger who started the brighter of the two.

It was certainly a more sedate start than their first encounter, which of course saw Froch hit the canvas in the opening round, but the challenger’s speed was proving effective as he landed some snappy combinations.

However, Froch grew into the contest as the rounds progressed, evidenced by a cut under his opponent’s left eye, and it was a stunning right two minutes and 34 seconds into the eighth that ended the contest legitimately this time, with referee Charlie Fitch aborting the count he had started as Groves was clearly not fit to continue.

Froch has now won 33 of his 35 professional fights and may look to gain revenge on Andre Ward before he hangs up his gloves, but was happy just to enjoy the moment.

“I am very proud and George Groves should be very proud I have been in with some of the best fighters in the world and lets be honest it was neck and neck and it was a stand off and sometimes in professional boxing it only takes one punch and unfortunately for George he was on the end of a heavy right hand.”