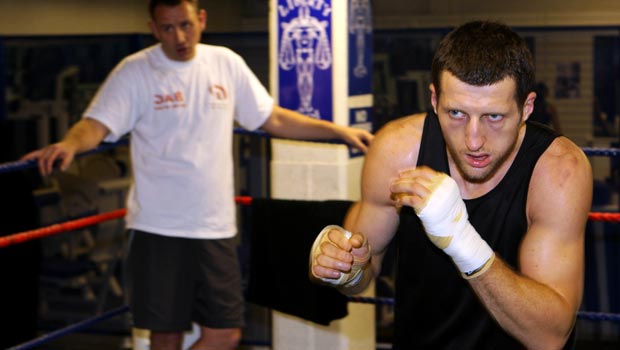 Carl Froch’s trainer Robert McCracken believes ‘The Cobra’ will put to bed any doubts over whether he is a better fighter than George Groves when the pair step into the ring on May 31.

Froch has faced plenty of criticism in the aftermath of his first bout with Groves last year following his controversial stoppage win over ‘Saint George’.

Many felt the fight had been stopped too early and that up until that point Groves had been in control of the contest.

The Nottingham-born champion admitted afterwards he had not taken the challenge of Groves seriously and McCracken claims he has not made the same mistake twice in the build-up to the rematch at Wembley.

Froch’s trainer says his man is eager to silence the doubters and has worked hard in training ahead of the defence of his IBF and WBA titles.

“Last time I would get the odd call off him: ‘What time did you say we are training again?’

“This time Groves has got his full attention, but at the same time a fight’s an amazing thing. Everybody can talk and talk, the reality is when the bell goes the fight unfolds the way it does and that’s what’s brilliant about the sport.

But one thing’s for sure, Froch is fully focused.”

McCracken says he has been working on weaknesses in Froch’s defence since the last fight and expects his man to put on a boxing clinic later this month.

Asked if Froch was the better fighter, McCracken replied: “Without a doubt. He boxed magnificently well against Arthur Abraham and Lucian Bute for example, he boxed really well.

“There’s lot of things we’ll work on and put right. The main thing is that Carl gets hit less and come the second half of the fight, if the fight is still going on, then obviously Carl gets stronger and stronger as it goes on.”