Posted by Vincent Henderson on October 25, 2017 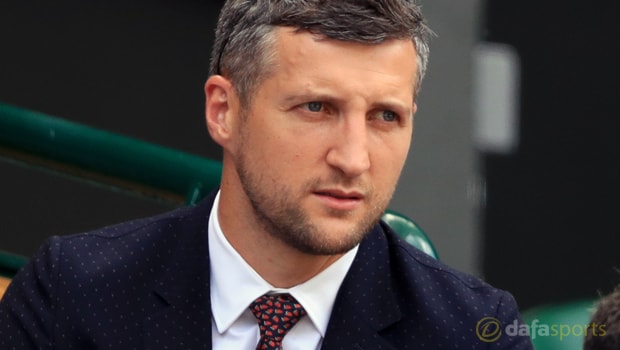 Carl Froch has backed Anthony Joshua to entertain the Principality Stadium crowd when he takes on Carlos Takam on Saturday night.

The 2012 Olympic champion puts his WBA (Super), IBF, and IBO heavyweight titles on the line in Cardiff and is expected to make it 20-0 in the professional ranks.

An injury to mandatory challenger Kubrat Pulev saw Takam promoted for the fight and he will offer a different challenge to AJ’s previous opponents.

The 36-year-old is shorter than many of the other big guns in the heavyweight division and has shown himself adept at using his stature to get inside his opponents and use his left hook.

However, he remains the massive 15.00 underdog and with Joshua just 1.02 to win, Froch says he can only see one outcome.

The champion has never been taken to 12 rounds and the Cobra believes the contrasting motivation for both fighters means it should be an interesting bout.

“I thoroughly expect Anthony Joshua to do the job against Carlos Takam and do it in his usual spectacular way,” he wrote in his column for Sky Sports.

“Yes, Josh could outbox and outclass Takam and get some rounds in the bank, part of his learning curve, but I can’t see that happening, for two reasons.

“The first reason is Joshua likes to entertain. The second reason is Takam himself.

If I am honest, I am actually looking forward to seeing him fight ‘Josh’, rather than Kubrat Pulev.