Posted by Vincent Henderson on December 22, 2017 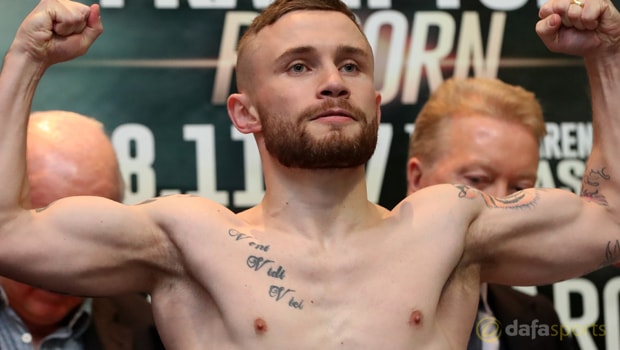 ‘The Jackal’ has been confirmed for a date with 35-year-old Donaire, who has won world belts in the flyweight, bantamweight, super-bantamweight and featherweight divisions and was at one stage rated among the best pound-for-pound fighters in the world.

Their clash is down for Belfast’s SSE Arena in the spring. Promoter Frank Warren confirmed that the veteran Donaire (38-4, 24KOs) was next in line for Frampton.

Warren said: “On 7th April we’ll be in Belfast where Carl Frampton will be fighting Donaire.

It’s a real cracking fight, a good fight for him and we’ll be giving further details in the New Year.”

The Antrim man was given a stern test by the unheralded Horacio Garcia last month before coming out with a points win in what his first bout since splitting with Barry McGuigan’s Cyclone Promotions and his trainer-son Shane earlier this year.

Victory for Frampton (24-1, 14KOs), who suffered his first professional defeat in January when he was beaten by Leo Santa Cruz in their rematch, could lead to a world title bout.

The Belfast boxer has made no secret of his desire to bring a big-time world championship showdown to his home city at Windsor Park Stadium.

Lee Selby and Josh Warrington are scheduled to fight for the former’s IBF featherweight and could present the next stop for Frampton, if he can get past Donaire.

Warren confirmed: “Selby-Warrington is a done deal, that’s signed, and we’ll be announcing a date for that in the next few weeks. It’ll be in Leeds.”