Posted by Vincent Henderson on December 15, 2013 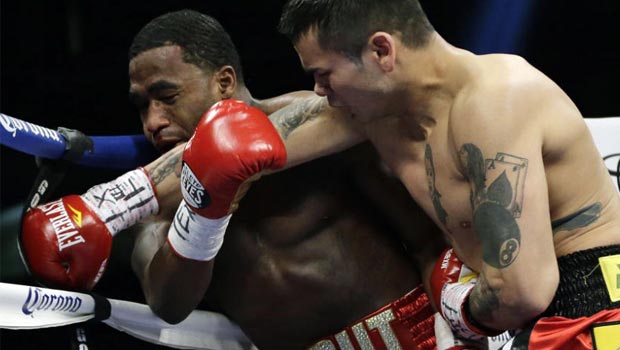 Adrien Broner says he wants to get back in the ring with Marcos Maidana as soon as possible after losing his unbeaten record to the Argentinean on Saturday night.

American Broner came into the fight the red hot favourite after a series of impressive displays, which had earned him comparisons with the likes of Floyd Mayweather Jr.

However, the 24-year-old proved to be no match for the South American in San Antonio, Texas, as Maidana took his opponent’s WBA welterweight title with a unanimous points victory.

El Chino’s power gave him an edge throughout the fight, and he was able to take advantage of an over-confident Broner in the early stages, rocking with a right in the first round before putting Broner down for the first time in his career in the next.

While the defending champion was able to recover somewhat, he was knocked down for a second time in the eighth following a devastating combination of punches to the head and body.

Maidana looked on course for a 32nd win via stoppage from that point on, hurting his adversary in the ninth and tenth rounds only for Broner to hang on until the final bell.

As for Broner (27-1-0), he had no complaints about the result but is desperate to have a rematch with Maidana sometime next year.

“I’ll tell you one thing, make a rematch. I don’t need a warm-up fight. I want a rematch.”