Posted by Vincent Henderson on October 12, 2013 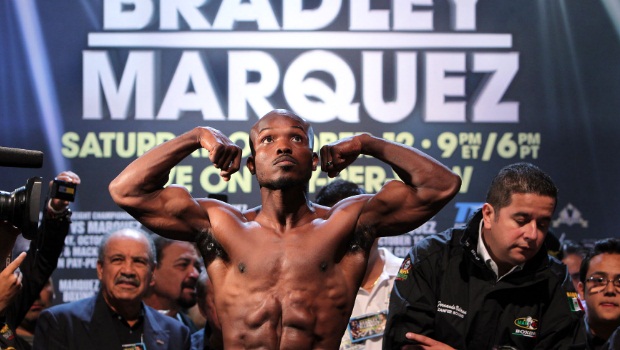 Despite being undefeated in 30 fights, Timothy Bradley is looking to gain the recognition of being a big-name fighter, which he feels he deserves, by defeating Juan Manuel Marquez.

The 30-year-old American has always struggled to win over fight fans, despite his unbeaten record, and his career was undermined by a controversial points victory against Philippines legend Manny Pacquiao in June 2009, which earned him the WBO welterweight belt but also led to massive criticism after seemingly everyone watching, barring the judges, thought that the Pac-Man had won.

In an effort to win people over, Bradley opted to abandon his usual boxing style to trade blows with heavy-handed Russian Ruslan Provodnikov in his first defence of his crown.

He survived an early barrage and a knockdown in the last round to win on points but knows he cannot afford to do the same thing when he faces Mexican Marquez, who himself managed to beat Pacquiao at the fourth attempt back in December last year in the WBO’s “Champion of the Decade” bout, this weekend.

Bradley, who claims he gained some kudos following the Provodnikov display, is looking to overcome the 40-year-old crowd favourite Marquez to finally prove that he is worthy of being looked upon as a star in the sport.

“I’m passed the Pacquiao thing now, I’m on a new road. I want this fight for my legacy. Two hall of fame fighters on my resume,” Bradley said.

“I’m a fan of Marquez, I love his style and has a really smart corner.

“He’s strong, he’s a smart fighter and great technician. One of the best counter-punchers in the game. It’s going to be a tough fight for me in there.

“He will want to come and get me because after the last fight they will think I’m vulnerable. But I’m going to be faster, I have natural speed and I’m smart and a great counter-puncher.

“It’s a very interesting fight and fans don’t know who is going to win.”