Boxing: Joshua has no game plan for Klitschko bout

Posted by Vincent Henderson on December 28, 2016 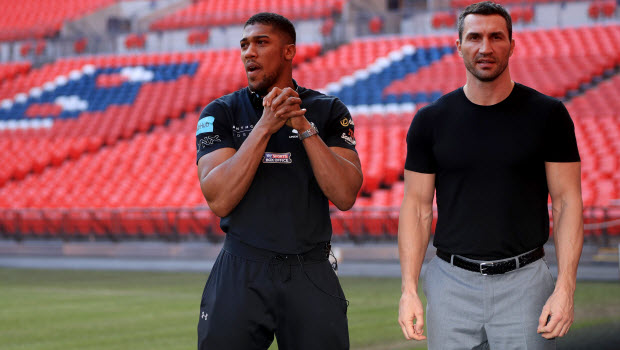 Anthony Joshua says he will have no set game plan for his upcoming bout with former unified world champion Wladimir Klitschko.

The pair are scheduled to meet at Wembley in April and unbeaten IBF champion Joshua admits he is not a fan of his opponent’s cagey style in the ring.

Joshua says a heavyweight must be willing to trade blows and make the fight exciting, something veteran Klitschko has not been known for during his career.

The British boxer is determined that he can adapt in the ring against his 40-year-old opponent. “It will be interesting to see which style I bring to the table against Klitschko.

I like to adapt to the fighter. Maybe I’ll counter him, maybe I’ll move on the back foot,” said Joshua. “I haven’t got a game plan. That’s why I like shots thrown at me, because I figure them out.

I’ll hopefully figure out Klitschko as the rounds go on.” Joshua has stopped all 19 professional opponents while Klitschko has 53 knockout wins on his record from 64 fights.

While he is not a fan of Klitschko’s preferred style in the ring, Joshua is respectful of his next opponent and he does not envisage any dramatic change of ring craft at Wembley.

“His style has worked for him so you can’t knock it. But you’ve got to land a few, give a few, work on the inside. The first rounds are always cagey but, by the fourth round, the fight has to get exciting,” he added.

“That Riddick Bowe-Evander Holyfield style scrap? That Dillian Whyte-Dereck Chisora style scrap? You never know, but I don’t see him fighting like that.” Joshua is 1.44 to beat Klitschko, who is priced at 2.80 for the April 29 bout.