Posted by Vincent Henderson on October 29, 2017 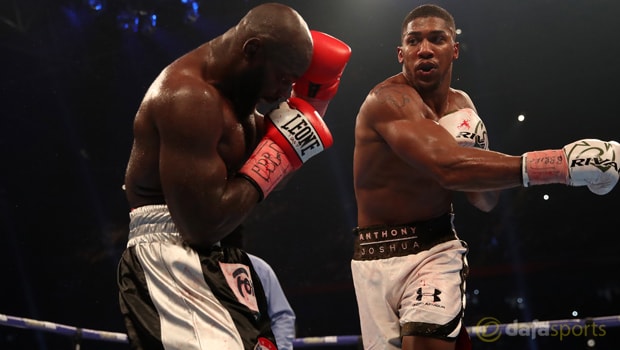 The British ace has now won all 20 of his professional fights by knockout, although there was an element of controversy about the manner of his latest victory, as referee Phil Edwards brought the fight to a premature end in the 10th round, even though the plucky Takam was still standing.

Joshua refused to be drawn on the referee’s decision after the bout and he reiterated that he still has the utmost respect for Takam.

“I have no interest for what’s going on with the officials,” Joshua said post-fight.

“My job is the opponent. I don’t have control over the ref’s decision.

“It was a good fight until the ref stopped it. I have the upmost respect for Takam.”

Joshua will now turn his attention to 2018, with promoter Eddie Hearn confirming that a potential unification fight with WBC champion Deontay Wilder, as well as an all-British showdown with Tyson Fury is on the cards.

“AJ wants the belts. Deontay Wilder vs AJ has to happen,” Hearn said.

“There’s also a heavyweight called Tyson Fury who has to come back to the sport. AJ will give [fans] the fights that you want, I promise you that.”

American Wilder, who like Joshua has a flawless record in professional fights, will put his WBC title on the line when he takes on Canadian Bermane Stiverne in New York next weekend.