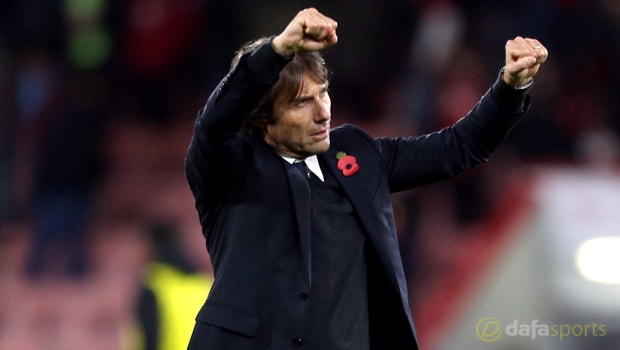 Chelsea boss Antonio Conte admits his side must be realistic when it comes to their chances of winning the Premier League title this season.

The Blues claimed top-flight glory by seven points last term, but they have made an indifferent start to the current campaign, picking up 19 points from their 10 matches to date.

The West Londoners did secure a 1-0 triumph over Bournemouth at the Vitality Stadium on Saturday, although they remain a full nine points behind early-season pace setters Manchester City and Conte admits the Blues already need to be realistic on their title chances.

“At this moment we must be realistic by going game by game,” said Conte, when asked to assess Chelsea’s chances of catching Premier League leaders City.

Despite their relative struggles in the Premier League, Conte insists he is happy with Chelsea’s overall start to the season, as they currently sit top of their Champions League group and have progressed through to the quarter-finals of the Carabao Cup.

“We are first in our group in the Champions League. We went into the next round of the Carabao Cup after going out in the second round last season,” Conte added.

“I’m very happy with this group. There are players who are very honest, players who want to fight until the end for something important.”

Chelsea are next in action when they travel to the Stadio Olimpico to take on Roma in the Champions League on Tuesday.