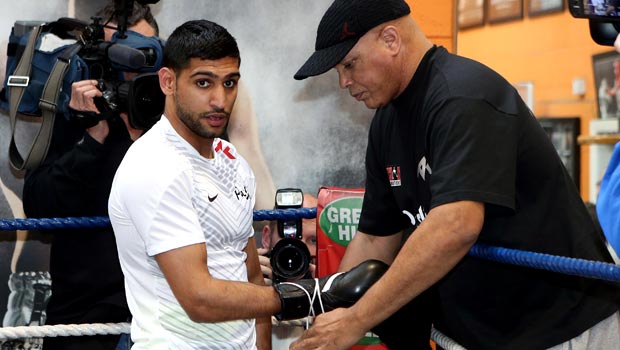 Amir Khan is hoping to grab the headlines as he prepares to make his welterweight debut against Luis Collazo on Saturday night.

The two fighters will meet in Las Vegas on the bill of Floyd Mayweather’s fight against the powerful Marcos Maidana.

Khan will have his work cut out against the southpaw, with Collazo coming into the fight after knocking out Victor Ortiz.

The Bolton fighter had been expected to take on Mayweather, but he insists he is focused on his next opponent instead of a fight against the pound-for-pound champion.

He has endured a miserable 12 months out of the ring, with his last fight coming against Julio Diaz last April.

During his absence he has worked hard with trainer Virgil Hunger in San Francisco, and admits he is out to silence the doubters.

“I’m looking forward to the big fight against Luis Collazo. It’s my first fight at 147. I’m excited, I really believe that I belong in the welterweight division; it’s going to be my division for my future career,” he is quoted as saying by BoxNation.

“I really believe we can steal the show, and that’s all we want to do. Whenever I fight I want to give it 100 percent.

I want to give the fans what they want to watch, and I really believe that this fight could be the one that could steal the show on the night.

“You’ll definitely see a different Amir Khan coming into this fight because I’ve had a lot of time to work on things, and work on new strategies, and also work with my trainers, Virgil Hunter and also my strength conditioner, Tony Brady.

So, I know I’m going to be ready in this division, and I can’t wait to step in the ring.”