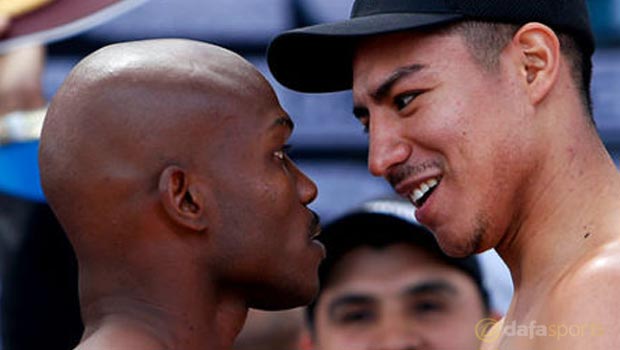 American Timothy Bradley Jr has appeared in confident mood ahead of Saturday’s fight against Jessie Vargas and has vowed to “whup” his compatriot.

Bradley, also known as ‘Desert Storm’, is a former two weight title holder but his results in 2014 were disappointing to say the least.

The American lost his WBO welterweight title to Manny Pacquiao in what was his first career loss and this was followed up with a dismal draw against Diego Gabriel Chaves.

Bradley’s performance in the latter was the most disappointing as he was the heavy favourite going into the bout against the Argentinian fouler.

Saturday’s contest at the StubHub Centre in Carson, California, is a vital one for both competitors and ‘Desert Storm’ needs a victory if he is going to attract the big-name fighters.

Vargas on the other hand is hoping to prove he can mix it at this level and this is the biggest test for the undefeated 26-year-old so far.

Bradley certainly seems fired up for the bout and the American has not only vowed to defeat Vargas, but also retired Mexican boxing great Erik Morales.

“Jessie Vargas? I’m going to whup his ass on Saturday,” he said. “And if Morales got a problem and he wants some, he can get some at the end of the year too.

“I’m going to beat his boy. Then I can come back and I’ll beat his [Morales’s] behind. He can come out of retirement. We can fight at a catchweight – 154lbs, 200lbs- and I’m going to whup your ass next.

“I’m fired up for this! Saturday night is going to be a good night.
I’m going to walk out of the ring with another belt strapped around me.”