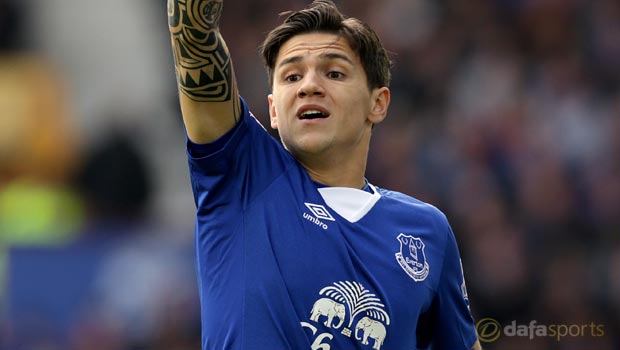 Everton midfielder Muhamed Besic is hopeful the club can put a strong Premier League season together and make a return to European football for the 2016-17 campaign.

The Toffees enjoyed a successful run in Europe’s second-tier competition last term after Roberto Martinez’s side made it to the last 16, eventually being knocked out 6-4 by Dynamo Kiev.

However, the good result results in Europe had a major impact on the team’s performances in the Premier League and the Blues were languishing near the bottom three at one stage.

Everton eventually finished 11th in the table which meant that European football would not be on show at Goodison Park next term.

Besic, who joined the Toffees last summer, enjoyed a decent debut campaign after the defensive midfielder made over 20 appearances.

The Bosnia and Herzegovina international believes the busy schedule of fixtures helped the squad develop and the 22-year-old is hopeful of enjoying a better time in the Premier League this time around.

“It was a fantastic experience. It was a big thing that everyone wanted,” Besic said. “Next year we will try and get into Europe again and, if we do, hopefully the next time we will do better.

“Last season we played a Sunday match, then Thursday, and again on a Sunday, so we would have three games in seven days. I think that all of us learned a lot from that.

“It was a big experience to see how the players would focus and how they would eat and prepare as that is so important. Everything that was done, I tried to take a lot of information from it to help me to develop.”

Everton start their new campaign on August 8 with a home clash against Watford and the hosts are 1.73 to pick up the win while the promoted Vicarage Road outfit are 4.75.