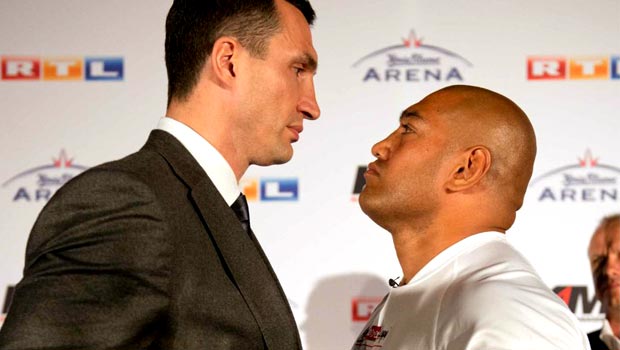 Alex Leapai believes that he is the man to finally bring an end to Wladimir Klitshcko’s dominance of the heavyweight division when the two meet in Oberhausen, Germany on Saturday night.

Leapai has impressed in the division and earned a shot at the Ukrainian after picking up a points victory over the then 33-fight unbeaten Denis Boytsov in Germany in November.

Australian Leapai is the latest in a long line of challengers to try and usurp Klitschko and enters the bout with a record of 30 wins, four losses and three draws.

However, despite not boasting the strongest record, the 34-year-old believes his power will be too much for his opponent to handle.

Leapai said: “People talk about how great Wladimir is and the 61 victories he has had in his career – but I on the other hand think of the fact that he has been comprehensively KO’d three times by people who cannot punch nearly as hard as me.”

Klitschko, who is 1.08 to retain his belts, was last defeated in April 2004 when American Lamon Brewster secured a TKO victory in round five.

The 38-year-old convincingly defended his titles against unbeaten champion Alexander Povetkin in his last bout in October and he does not see any other result as he makes his 16th title defence – the third-most in heavyweight history.

However, Leapai, available at 7.66, insists that this will not be his toughest fight to date and he is approaching the match brimming with confidence.

He continued: “I will break Wladimir and it will not be my hardest fight. He has been champion now for 10 years. He has been comfortable. But he is going to fight somebody who is hungry and determined to make history.”