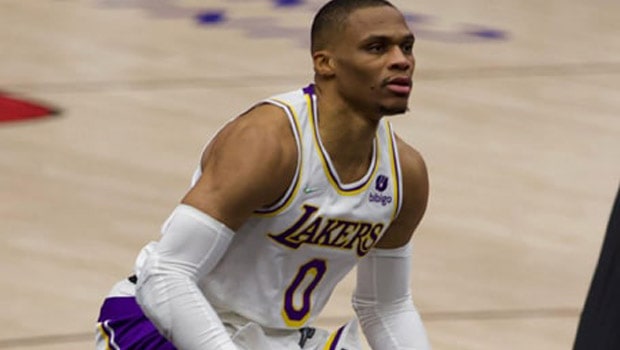 The Los Angeles Lakers are still trying to trade Russell Westbrook but there are not many takers. Let’s take a look at three dark horse teams that could ended up with him next season.

Whether you are a fan of his playing style or not, Russell Westbrook has put together a very impressive career. The numbers don’t lie, some think he’s a stat-padder but his resume and his accolades are there. Westbrook’s first year with the Lakers was a mess though.

Westbrook and Lakers fans didn’t get along. It also didn’t help that the team just couldn’t stay healthy but Russ was far from efficient. To make matters worse, right now the Lakers aren’t hiding the fact that they’re actively trying to trade Westbrook for Kyrie Irving.

Even if the Lakers manage to trade Westbrook and his $47 million, and this is a big if, the Nets have reportedly shown zero interest in keeping Russ around. With that in mind, we look at three potential dark horse destinations for Westbrook.

The Spurs have been rumored as a potential third team in a trade between the Nets and Lakers. This team has a big need at point guard with Dejounte Murray heading to the Hawks and they have enough cap space to absorb Westbrook’s massive contract.

Of course, the Spurs don’t really need Westbrook because they’re looking to tank and rebuild, which is precisely why they traded Murray but Westbrook can take a John Wall approach and just refuse to get bought out. He can even sit and get his full $47 million or just try to prove his worth by leading the Spurs to the playoffs.

The Pacers were interested in trading for Westbrook multiple times over the last couple of years and they’re also one of the few teams with enough cap space to make this happen, especially if they can get a future first-round pick as part of this move as well.

Many would prefer the Pacers to have Tyrese Haliburton leading the offense, but trading for Westbrook could also help them move Myles Turner, a player who could get them additional draft compensation. Indiana may not win many games but that’s not a bad thing in their current position.

League insiders believe that the Knicks could look to trade for Russell Westbrook if they manage to acquire Donovan Mitchell from the Jazz. This comes on the heels of signing Jalen Bunson via free agency, which doesn’t make much sense but hey, it’s the Knicks!

This is a team with a long history of questionable decisions, so them going for a three-headed monster at guard with Westbrook, Mitchell and Brunson isn’t out of the question, after all, they’ve craved for All-Stars for years and are desperate enough to get wins.