The Story of Derrick Rose 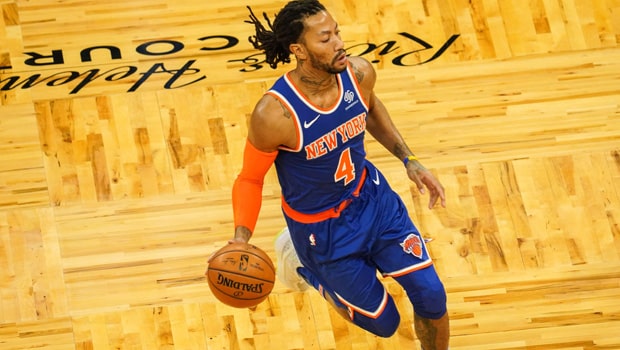 Derrick Rose has had big performances, has been explosive, skilled and he has taken games over in his second stint with the Knicks, helping them reach the playoffs for the first time since 2013. Tom Thibodeau, who also coached Rose in Chicago and Minnesota, brought him to New York because he knows that he is still one of the best point guards in the world. You can’t see this on a stat sheet or from a production or numbers standpoint but Thibodeau knows who Rose is and how to tap into it, how to empower him and what happens when you empower him.

D-Rose chose to enroll at Memphis to play under John Calipari and he wasted little time making an impact. In his lone year at Memphis he led the team to 38 total wins (the most in NCAA history) and to the 2008 National Championship game, where they lost to Kansas 75-68 in overtime.

Rose finished that contest with 18 points, eight assists and six rebounds, cementing his place as one of best players in school history. Then he declared eligible for the NBA Draft and in June, 2008 his hometown Chicago Bulls selected him with the first pick. He averaged 16.8 points and 6.3 assists per game in his first season in the NBA (2008-09), earning the Rookie of the Year Award and leading the Bulls back to the playoffs.

In his next three seasons, Derrick Rose became one of the best all-around players in the NBA and after a stellar 2010-11 campaign, in which he averaged 25.0 points, 7.7 assists and 4.1 rebounds, Rose was named NBA MVP (at 22 years, 191 days old he was the youngest to earn the award).

In the 2011-12 season Rose led the Bulls to the No. 1 seed in the Eastern Conference but he tore his ACL in the first game of the playoffs, while trying to leap off his left foot in the lane with 1:22 to play against the 76ers and he missed the rest of the year and all of the 2012-13 season.

Rose has also dealt with multiple ankle sprains, foot issues and elbow soreness, just to name a few. Overall, he was forced to miss 276 total games before the start of the 2017-18 season and at one point, he left the Cavaliers to re-evaluate his future in the NBA and even considered retiring.

The Bulls Decide to Move on from Him

On June 23, 2016, the Bulls wanted the franchise to move in a different direction and they made one of their hardest decisions when they traded Rose, Justin Holiday and a second-round pick to the Knicks for Robin Lopez, Jose Calderon and Jerian Grant.

Since that trade Derrick Rose has played for three different teams, the New York Knicks (2016-17), Cleveland Cavaliers (2017-18) and Minnesota Timberwolves (since 2018 until now). Rose actually played well for the Knicks but the team wanted to focus on rebuilding.

D-Rose played and started 64 games for the Knicks, averaging 18.0 points, 4.4 assists and 3.8 rebounds in 32.5 minutes but New York decided not to renew his contract and instead draft Frank Ntilikina.

The Lowest Point of D-Rose’s Career

Rose then signed a one-year deal with the Cleveland Cavaliers on July 24, 2017, with the team hoping that him, LeBron James, Kevin Love, Dwyane Wade and Isaiah Thomas, among other star veterans would make a deep playoff run. Rose played just 16 games for the Cavs (seven starts), averaging 9.8 points in 19.3 minutes before the team decided to trade most of their roster.

Derrick Rose was sent to the Utah Jazz in February, 2018, as part of a three-team trade with the Sacramento Kings. The Cavaliers acquired Rodney Hood and George Hill, the Kings got Iman Shumpert and Joe Johnson and the Jazz received Jae Crowder and Rose. Two days later D-Rose was released as the Jazz wanted to clear cap space.

This was probably the lowest point of Rose’s career but he never gave up and he is still one of the best point guards in the world. Just ask his peers. Rose has always had a special kind of fire and that never leaves you. That fire is what made him become the youngest MVP in NBA history and years later come back after all his injuries! That love for the game is why he is still here!