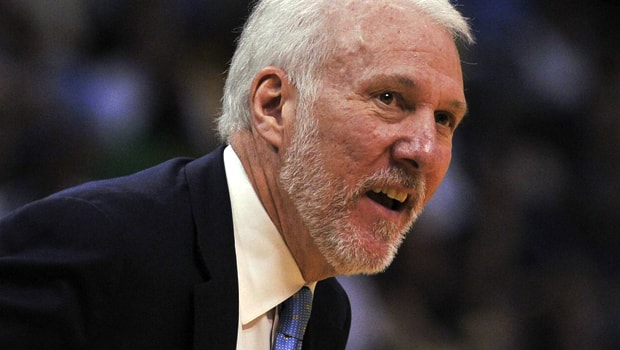 San Antonio Spurs head coach Gregg Popovich says he is pleased with how the team are looking ahead of the 2017 NBA Play-offs, which get underway on April 15.

San Antonio, who won the last of their five championships in 2014, have already booked their spot in the first round of the play-offs after an impressive regular season.

The six-time conference title winners, who will take on the Memphis Grizzlies for a place in conference semi-finals, are now just keeping themselves in good shape while testing out some new tactics.

However, Spurs suffered a narrow 99-98 defeat in their penultimate regular season game at the hands of the Portland Trail Blazers on Monday.

Small forward Kawhi Leonard did score 18 points for the Texas-based outfit while power forward Pau Gasol, who has been with the team since 2016 after leaving Chicago Bulls, ended with 13 rebounds.

That defeat has dropped San Antonio’s record in April to 3-3 and their final regular season fixture takes place on Wednesday at Utah Jazz, who are fifth in the Western Conference.

Speaking about the recent loss, Popovich says he got exactly what he wanted from the match and is feeling positive ahead of a strong challenge for glory in this campaign.

“Oh yeah, yeah,” he was quoted as saying by ESPN. “Everybody’s just trying to sharpen up as much as possible before the play-offs. There’s always some good, always some bad to work on.”

Spurs, who are third-favourites at 7.50 to be the NBA Finals winner, will go up against either the Houston Rockets or Oklahoma City if they make the semi-finals.

Golden State Warriors, who take on Portland Timbers in the first round, are the 1.67 favourites to win the title while the Cleveland Cavaliers are next in the betting at 3.80.