NBA Analyst Urges Lakers to Run it Back With Carmelo Anthony

Posted by Marlon William on September 7, 2022 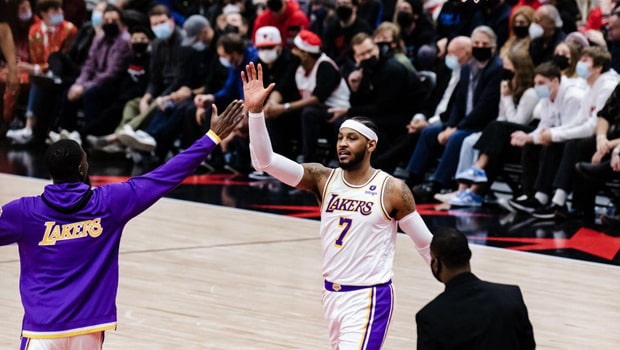 On August 7, Cuffs The Legend, host of the “Some Dude Show” tweeted that the Lakers should re-sign Anthony.

Anthony made big contributions for the Lakers last season, averaging 13.3 points and 4.2 rebounds in 26 minutes over 69 games (three starts), shooting 44.1 percent from the field and 37.5 percent from three-point range.

Anthony’s impressive resume includes 10 NBA All-Star Games, selection to the All-NBA team six times and selection to the NBA’s 75th anniversary team. He was the focal point of the offense for most of his career with the Nuggets and Knicks. Anthony has transitioned to a supporting role.

Melo got off to a hot start with the Lakers, putting up 16.7 points on 50 percent shooting from the field and 52.2 percent from beyond the arc in October. However, the 38-year-old cooled as the season progressed, particularly when the Lakers relied on him to play a larger role when injuries hit the roster. On April 11, Dave McMenamin of ESPN talked to Anthony about his experience with the Lakers.

“This was another chapter for me. I can say I’ve experienced it. … I can finally check the box — played with Bron. Played with AD. We had, on paper — we were phenomenal on paper. Me, personally, I had a good year, personally. Just as far as happiness and being able to go out there and compete and being able to do my part, play my part on this team. There were good days, there were bad days, but we got through it, and I got through it.”

Anthony scored at least 20 points 11 games last season, proving he can still be a talented scorer off the bench. Anthony averages 22.5 points, 6.2 rebounds and 2.7 assists in 34.5 minutes over 1,260 career games with the Nuggets, Knicks, Thunder, Rockets, Trail Blazers and Lakers.