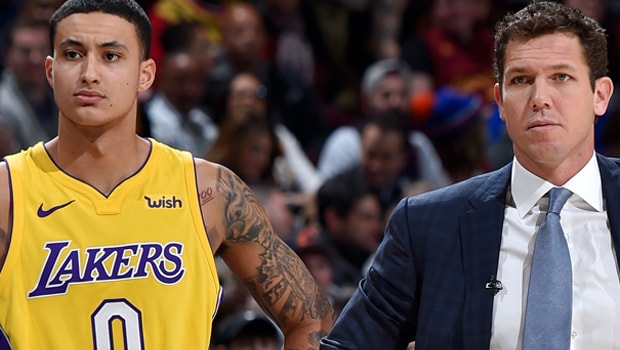 Recent reports had suggested the Lakers had lost faith in their coach following a nine-game losing run at the turn of the year that saw them slip to the bottom of the Western Conference standings.

Even a much-needed 132-113 victory over the Atlanta Hawks last time out, a win that ended their losing run, has done little to ease the pressure on Walton’s shoulders, particularly as the Lakers are in danger of missing out on the playoffs for the fifth successive year.

Despite that growing pressure, rookie Kuzma insists the entire Lakers roster remains fully behind their coach and it is the players that should shoulder the brunt of the blame for what has been a disappointing season to date.

When asked if the team had given up on Walton, Kuzma said: “I don’t think that’s the case.

“When you lose games, at the end of the day Luke isn’t the one going out and shooting 2-for-15, turning the ball over, having turnovers or missing free throws. That’s us.”

Kuzma is certainly enjoying playing under Walton and he is hoping to continue his development under the guidance of the former Golden State Warriors assistant.

Los Angeles are next in action when they play host to the Sacramento Kings at the Staples Center on Tuesday, a game they need to win to boost their chance of reaching the Western Conference playoffs.

The Lakers have not claimed the Western Conference title since 2010, but they are priced at 151.00 to end that wait this season.