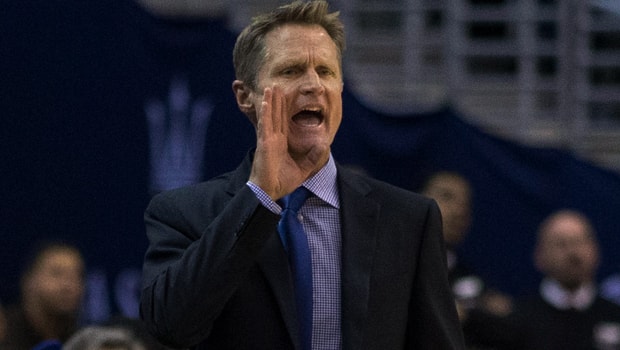 Steve Kerr admits Kevin Durant’s consistency continues to be one of the critical components of Golden State’s quest for a repeat NBA Championship.

The small forward was the MVP in last year’s Finals and has maintained his form during another excellent campaign for the Warriors.

Durant managed 32 points, six rebounds and four assists in Wednesday’s 109-101 win at the Washington Wizards to extend the Warriors’ recent winning run to four and maintain the pressure on the in-form Houston Rockets at the top of the NBA’s Western Conference.

Despite being a nine-time All-Star, the 29-year-old has not always received the plaudits he perhaps deserves, with team-mates Steph Curry and Klay Thompson, AKA the ‘Splash Brothers’ often grabbing the headlines.

However, his coach Kerr insists the 2014 MVP’s contribution to the team is widely acknowledged within the locker room.

Speaking about the small forward, the Warriors’ coach admitted the former Oklahoma Thunder-man deserves the extra credit he is starting to receive, with his consistency vital to his Golden State’s hopes of a third NBA crown in four years.

“He’s going to be a top-five guy every single year. “Beyond that, there’s a lot of good candidates and guys having great years. Kevin is obviously going to be considered every single season.

He’s that good.” Meanwhile, the Western Conference’s third-place side, the Minnesota Timberwolves, are in action at Portland on Thursday.

The Wolves are 2.63 to win in Oregon, with the Trail Blazers the 1.50 favourites.