Stephen Curry to try his hand at pro-golf 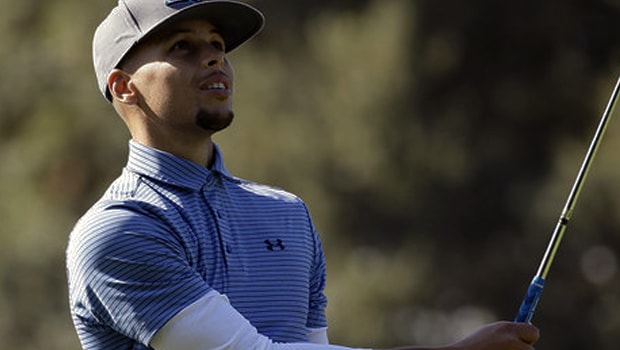 Golden State Warriors guard Stephen Curry will be trying his hand at something completely new in August when he plays in a professional golf tournament.

Curry will swap a basketball for a golf club when he plays against professionals in the Web.com Tour’s Ellie Mae Classic in Oakland.

The 29-year-old has received a sponsor exemption to compete in the second-tier tournament, which takes places at TPC Stonebrae, close to the Warriors’ home arena.

Curry, twice named the NBA’s Most Valuable Player and fresh from helping the Warriors to NBA Finals victory over the Cleveland Cavaliers at the end of a record-breaking season, insists he is very excited at getting the chance to complete in such exalted company.

“I’m looking forward to hopefully not embarrassing myself,” he said.

“Golf has always been a passion of mine and it’s a dream come true to get the chance to play inside the ropes amongst the pros in a PGA Tour-sanctioned tournament.”

He is not the first San Francisco-based sports star to appear at the tournament.

Curry, twice an NBA Championship winner with Golden State, plays golf with a 2.2 handicap and tournament director Trish Gregovich is excited to have the NBA superstar on board.

“We are elated to have Stephen Curry compete in this year’s Ellie Mae Classic at TPC Stonebrae,” she said.

“Our longstanding goal has been to create a meaningful community impact through this event, and allowing a true pillar of the Bay Area community and a genuine sports superstar inside the ropes to compete alongside future PGA TOUR stars helps to elevate that effort.”

Meanwhile, Rickie Fowler is 9.00 to win this week’s Quicken Loans National on the PGA Tour while Ryder Cup team-mate Patrick Reed is 15.00.