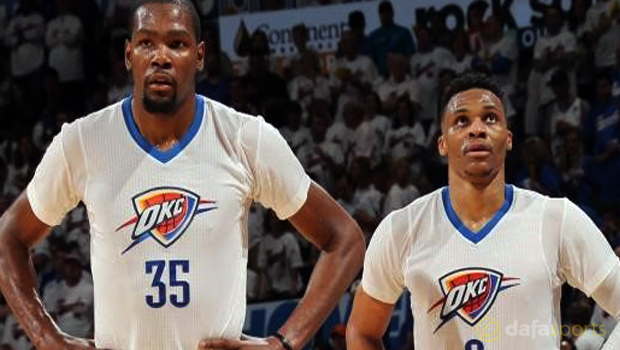 Oklahoma City duo Kevin Durant and Russell Westbrook felt the Thunder let Game 3 of their Western Conference semi-final series against the San Antonio Spurs slip through their grasp as they went down 100-96 on Friday night.

The Spurs now lead the series 2-1 after bouncing back from Monday’s one-point defeat at home as they edged a thriller at the Chesapeake Energy Arena in Oklahoma.

The Thunder appeared on course to make it back-to-back wins when their offence found its grove in the fourth quarter, with Serge Ibaka and Westbrook hitting back-to-back three pointers to put them ahead for the first time in the second half.

However, the Spurs battled back and took advantage of some poor offensive play by the home side, with Tony Parker draining two buckets from the free throw line with 18 seconds to go to strike the decisive blow.

Parker’s defining free throws came after Kawhi Leonard had been fouled, having grabbed the rebound from LaMarcus Aldridge’s miss, the 11th time on the night the All-Star had come up with a rebound.

Leonard also had 31 points on the night while Aldridge added a further 24 and Parker contributed 19 points.

Westbrook matched Leonard’s total but was disappointed to have not scored more, having made 10 of 31 shots on the night.

“Too many shots,” Westbrook said.

“I’ve got to do a better job getting guys shots. I’ve got to get other guys involved, especially to beat this team.

Even though I had some shots I (usually) make, I’ve got to read and find ways to get guys shots. I take the blame.”

Forward Durant was eager for the team to share the blame, feeling they had let the match slip through their grasp having got back into in the fourth quarter. “We played good defense and were down seven with a minute to go and cut it to two,” Durant said.

“We made him (Aldridge) miss his shot, and the ball kind of fell in his (Leonard’s) hands.

He was in great position to get the rebound, and that sucks.”

The two sides meet again on Monday night in Oklahoma for Game Four, with the Thunder 1.91 to level the series while the Spurs are 1.80 to take a two-game lead.