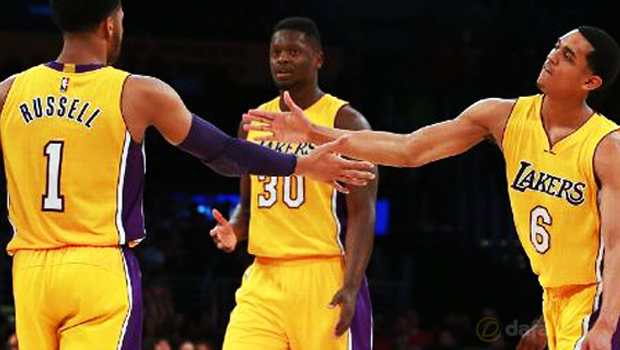 The Los Angeles Lakers backed up their victory over Golden State Warriors with a win over Orlando Magic on Tuesday.

The Lakers had won just 12 games all season prior to seeing off the Warriors in a result regarded as one of the biggest upsets in the history of the NBA.

Some had expected a return to form when the Magic came to LA on Tuesday but Byron Scott’s team recorded a 107-98 victory, thanks largely to a dominant third quarter.

Orlando led early on but the Lakers rallied to grab a second successive victory and put a dent in the Magic’s already fading play-off hopes.

Kobe Bryant came through a shoulder problem to play against Golden State but he was not risked against the Magic.

It is the Lakers legend’s final season before retiring and the win over the Magic perhaps demonstrates they can be a more competitive team next season even without their talisman.

Power forward Julius Randle, 21, grabbed a double-double, with 23 points and 11 rebounds, and he felt it was important the Lakers backed up their win over Golden State.

Randle told ESPN: “We have to show that we have grown and are not satisfied with one game but are able to come back the next game and play well again.”

The Lakers are a team in transition and much is expected of Randle and fellow youngsters D’Angelo Russell and Jordan Clarkson in the coming years.

The Lakers are out of the running for a place in the play-offs while even finishing off the bottom of the Western Conference could be a tough ask, as they have managed just 14 wins all season – three less than Phoenix Suns immediately above them.

However, the win over Orlando shows the Golden State victory wasn’t just a one-off and, with their younger players starting to show form, there are finally some signs of recovery after years of decline.

Golden State are 1.91 to win the NBA Championship for a second successive season.