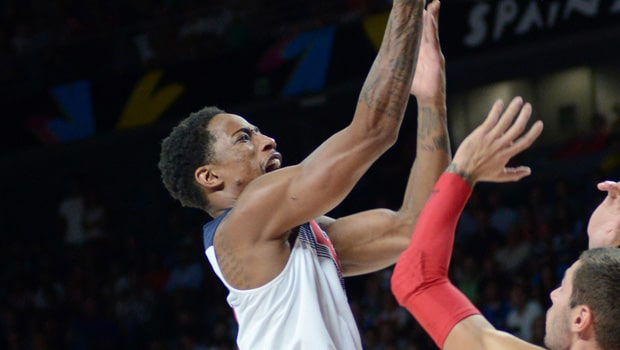 Kobe Bryant is a big name in basketball history. Young stars like Kyrie Irving, Devin Booker, Zach LaVine and Jayson Tatum, to name a few, still take inspiration from Kobe for his work ethic and the legacy he has left behind. Kobe’s signature line with Nike caters to youngsters with inspiration. After his passing, players took to wearing Kobe sneakers to mark their honor for him.

Recently, the Bulls forward DeMar DeRozan spoke about Kobe and how players viewed him with respect. While speaking about Kobe sneakers, DeRozan had good things to say and compared the ‘Black Mamba’ with MJ saying, “This generation looks at Kobe like our Jordan.”

Kobe Bryant is also one of the greatest NBA players of all-time and he had valuable advice on overcoming anxiety and fear. Some believe that Kobe could be the greatest Laker ever. Two jersey numbers in the rafters at the STAPLES Center prove this.

It’s hard to believe that Michael Jordan, to me the best basketball player of all-time, was cut from high school team as a sophomore but it really happened. Just a few years later, North Carolina claimed the 1982 national championship after MJ made the game-winning jumper against Georgetown. This was the beginning of Jordan’s legend. He then won six NBA championships in six trips to the NBA Finals, as well as eight scoring titles, five regular season MVP awards, six NBA Finals MVP awards, three NBA All-Star game MVPs and one Defensive Player of the Year award.