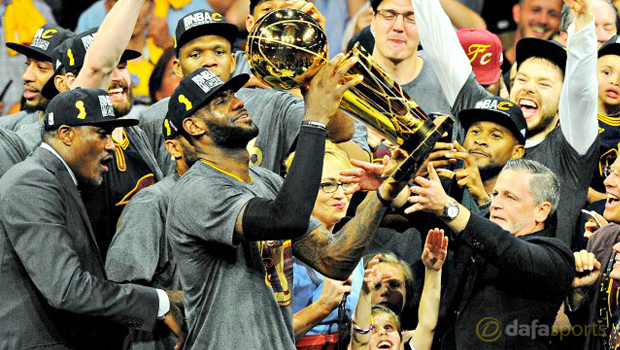 This is it. The most awaited Game 7 of the NBA Finals 2016. Today will come a thrilling conclusion between two legacies, the east and the west.

The question remains. Who will take home the victory? Would it be a back-to-back championship for Golden State or will Cavs finally live up to their dreams and succeed on their first title?

Going back to the journey, Warriors held 3-1 series lead and NBA Finals were pretty much over. It seemed that LeBron James and the rest of Cavs couldn’t even find the formula of defending. Suddenly, the momentum changes after two consecutive games continuing with the drama (Kevin Love and Draymond Green of the game), slippage has seen from the Warriors and the script has been flipped.

Game 7 is truly a Home advantage for Golden State Warriors. Draymond Green is making a comeback with a game high of 22 points nailing 5 3-pointers 6 rebounds and 5 assists as the opening half starts. On the other hand, Cleveland Cavalier only recorded one point from the arc but dominated scores from the paint battle 28-12. LeBron James scores 12 points 8 rebounds and 5 assists so far. Meanwhile the Splash Brothers Stephen Curry and Klay Thompson haven’t played exploded yet.

During the 2nd quarter trading of buckets takes place between teams. At 9:01 mark, Mo William scores but Draymond Green has the answer giving GSW a 2-point lead 29-27. Both teams at 11/28 shooting percentage but Cleveland still lead the paint battle at 20-6. At 3:30 LeBron James cuts the lead by 1 40-41 via strong rack finish. 2nd quarter ends at 49-42 still in favor of Warriors.

The second half opened with a 3-point shoot from J.R Smith. Klay Thompson has the answer for Warriors followed by another pull-up jumper surging the lead to 8 points (the largest lead of the night) at 54-46 Warriors. J.R Smith drains few more 3 pointers plus the baseline jumper from Kyrie Irving which tied the scores as 54. Curry curls around and hits the 3-point giving Warriors a 3-point deficit.

Trading of buckets continues but Cavs regains at lead at 60-59 after 6-0 run. At 1:19 Harrison Barnes hits another 3-pointer and the Warriors regain the lead at 74-73. Draymond Green on the other hand now has game high of 28 points 8 rebounds and 7 assists. 3rd quarter ends at 76-75 still in favor of Warriors.

Cavs starters LeBron James, Kevin Love and Kyrie Irving all scored in the 4th quarter giving the lead at 81-78. Splash Brothers answered at nearly reaching the 5:00 mark with Steph Curry’s 28-foot 3-pointer followed by Klay Thompson regaining back the lead for Warriors at 85-83.

The score is tied at 89-89. At 0:53 mark, Kyrie Irving drains 3-point regaining the lead back to Cavs 92-89. 10 seconds remaining for Warriors. 4th and final quarter ends at 93-89. Cavaliers are now the NBA 2016 Champions after several finals appearance.