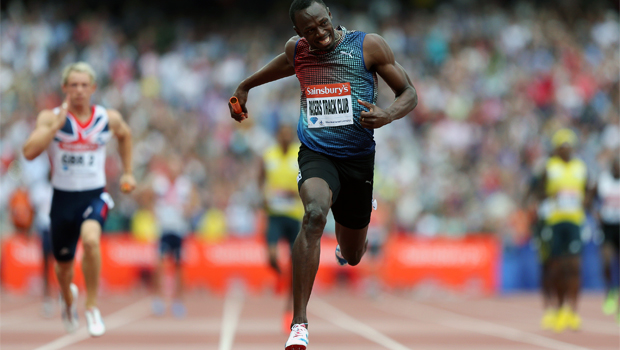 Usain Bolt says he is feeling good and is ready to win back his 100m title at World Championships in Moscow.

The Jamaican won the title back in 2009 in Berlin, but was then disqualified for a false start in Daegu in 2011.

That allowed his fellow Jamaican Yohan Blake to take gold but Bolt says he is in good shape and is ready to win back the title he lost.

Bolt is unsurprisingly the hot favourite to win the 100m and 200m titles and his chances of doing so have been boosted further with the news some of his key rivals will not be racing.

Blake is unable to defend his crown after withdrawing with a hamstring injury while former world champion Tyson Gay and Jamaica’s ex-100m world record holder Asafa Powell have both opted out after failing drug tests last month.

Bolt is finding his best form at just the right time after he recorded the quickest 100m time this year – 9.85 seconds – at the Anniversary Games, while he also posted this year’s fastest time in the 200m after running 19.73 seconds in Paris in July.

Bolt has not lost the hunger to win and will be going all out in Moscow.

“I want to keep winning every race that I compete in and the 100m and 200m finals in Moscow will be the biggest races for me this year,” added Bolt.

“My season has been good, I’m getting stronger every week and my execution and speed endurance is steadily improving.”