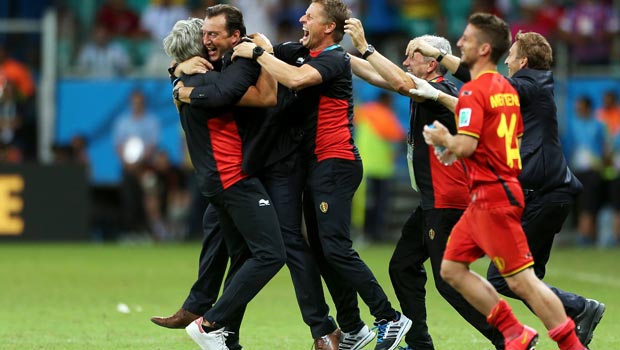 Belgium boss Marc Wilmots was quick to praise his side after they battled past USA to win 2-1 in extra-time at the World Cup on Tuesday night.

Wilmots’ side were on top throughout the first 90 minutes and had several opportunities to score, but inspired American goalkeeper Tim Howard managed to keep his side in the game.

The Red Devils took the initiative early in extra-time when they opened the scoring through Kevin de Bruyne thanks to some great build-up play from substitute Romelu Lukaku.

Lukaku then got on the scoresheet himself with Belgium looking destined for the quarter-finals.

However, a late Julian Green goal ensured the game went down to the wire with the USA players earning plenty of praise for their performance.

Despite failing to capitalise on their chances in the first 90 minutes, Wilmots was delighted with his players and paid tribute to their opponents.

He said: “We’ve seen a forward-thinking Belgium team. We had 27 shots on goal, the first came after the second minute and we didn’t stop attacking for the remaining 118 minutes.

“We had a lot of opportunities, and we dominated the game, and in the end it was well deserved even if it was scary with the US goal.

“I want to congratulate Jurgen Klinsmann and the USA team, especially Tim Howard who had a fantastic game and I think we deserved to win.

“We played football, we were brave and we pushed ourselves to the limits. Sometimes in games like that when you have so many chances and you are denied, the result doesn’t go your way but we didn’t stop believing.

“Now we have four days to prepare for the Argentina game, which isn’t long. We’re not favourites but we want to win.”

Belgium are 3.50 to beat Argentina with the South American side 2.12 to win, while the draw is available at 3.20 with Dafabet.