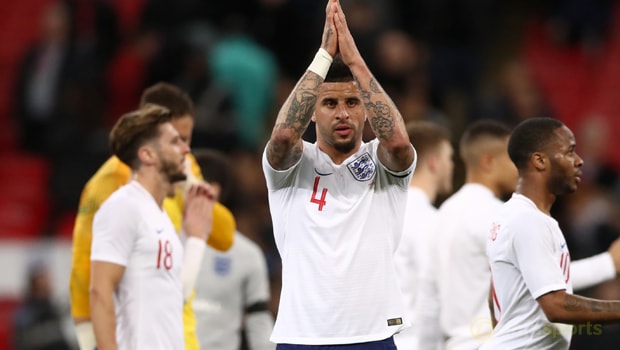 Kyle Walker says he is prepared to play at centre-back for England at the 2018 World Cup even though that is not his preferred position.

Walker has predominantly been a right-back throughout his career but in recent matches for the Three Lions he has been deployed as one of three centre-backs.

The Manchester City defender, who made 32 Premier League appearances this past season as the Citizens won the title in record-breaking fashion, is expected to be handed a starting role at the heart of the defence for England’s first game at the 2018 World Cup.

Tottenham star Kieran Trippier has been playing at right-back for both club and country and is being tipped to start in that position against Tunisia on Monday.

Prior to setting off for Russia, Walker spoke about being played out of position and, although he would prefer to be right back, he is ready to do what is required for his country.

“I have been playing professionally since I was 18 at right-back, so to go to your first World Cup and probably not play in your preferred position… is… well, not disappointing but a little bit of a step back,” he told British media.

“I have to move on from it… as long as the manager feels it is going to benefit the team, then why not?”

Head coach Gareth Southgate has some big decisions to make on which two will play alongside Walker, with John Stones, Gary Cahill, Phil Jones and Harry Maguire all vying for the two remaining spots.

England are heavy 1.44 favourites to pick up the win on Monday, a draw is priced at 4.33 whilst Tunisia 8.50 outsiders.