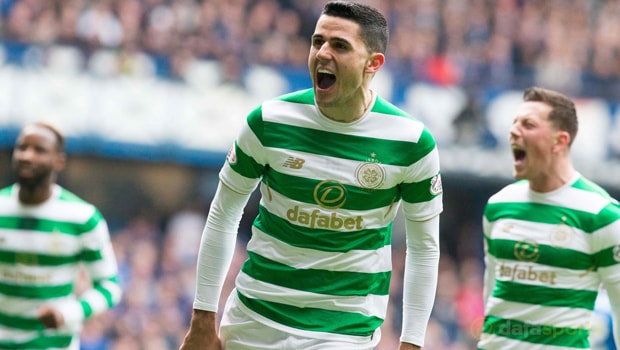 Former Celtic striker Chris Sutton believes the Bhoys have already done their best bit of business this summer after nailing Tom Rogic down to a new long-term contract.

Australia international Rogic initially struggled when arriving at Parkhead in 2013 from Central Coast Mariners and there were reports linking him with an exit just a year after joining.

However, the 25-year-old has become a lynchpin in the midfield over the past three seasons, making 75 Scottish Premiership appearances and scoring 20 goals in the process.

The Griffith-born star, who is part of his country’s 2018 World Cup squad, was said to be attracting interest from a number of clubs across Europe and a summer switch was being mooted.

But, to the delight of the Celtic supporters, Rogic decided to extend his stay until the summer of 2023 and put to bed any doubts about his future at the club.

Sutton, who played for the Hoops from 2000-2006, believes his former employers will not do a better business during the transfer window.

“I was adamant getting the Aussie nailed onto a long-term contract would be the best piece of work the club could do this summer and at this stage I’m standing by that statement,” he told The Record.

“Seeing Rogic go to a World Cup with just a year to go on his deal and a new extension still not signed would not have been ideal and the offers would have flooded in from elsewhere if he shone.

“Knowing the way the World Cup works they might get offers anyway regardless of the fact he’s signed that deal but Celtic are protected for a huge fee now and the player also seems happy to stay put.”

Celtic, who completed the domestic treble for the second successive year this past season, are 1.08 favourites to win the 2018/19 league title.