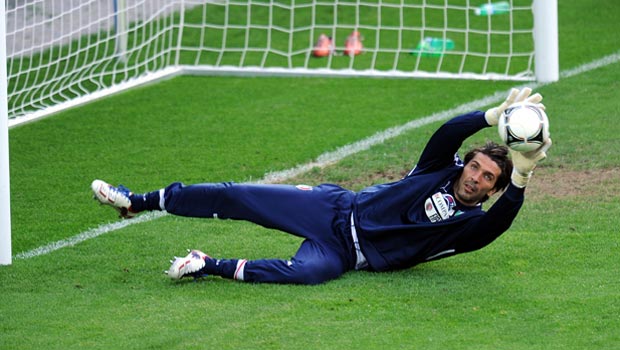 Italy goalkeeper Gianluigi Buffon is confident his team can progress from Group D but he doesn’t feel they currently have what it takes to lift the World Cup.

The Azzurri have been drawn against England, Uruguay and Costa Rica for this summer’s World Cup which gets underway on June 12. Italy’s first test will come against Roy Hodgson’s England two days later.

Buffon believes they have the upper hand against their group rivals, but he has played down his country’s chances of going all the way.

Coach Cesare Prandelli has yet to trim his squad for the finals with Giuseppe Rossi a doubt ahead of the announcement.

Despite showing his support for their group chances, Buffon believes the likes of Germany, Argentina, Spain and Brazil are the main contenders.

Speaking ahead of the tournament, he said: “At this moment, Italy are the team who can think about going the furthest compared with England and Uruguay – at least at the start of the tournament.

“The favourites are Brazil, Spain, Germany and Argentina. We are slightly further back.

“(If we play) from the quarter-finals onwards, we could say it has been a good World Cup and a positive tournament. But naturally, you are never fully satisfied. I don’t feel as if I can say today with certainty that we can reach the final.”

The Azzurri are currently 27.00 to win the World Cup with Dafabet, while they can be backed at odds off 2.55 to win Group D.