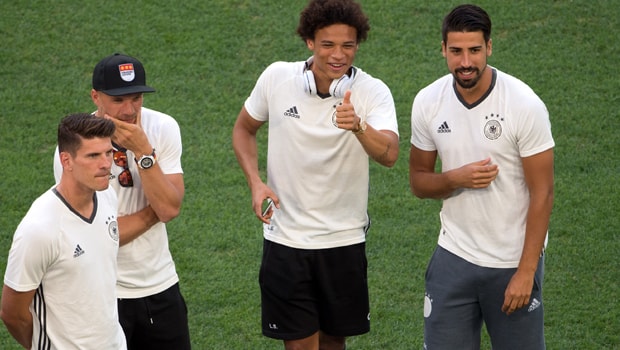 Sami Khedira insists Germany will not be underestimating Mexico when the two teams meet in their Group F opener in Moscow on Sunday.

The reigning champions will head into the World Cup as one of the favourites to claim overall glory, but they must first progress through a group that contains Mexico, Sweden and South Korea.

First up for Joachim Low’s side will be a clash with Mexico at the Luzhniki Stadium this weekend and the Germans will be hoping for a repeat of the 4-1 victory they claimed over the same opposition in the Confederations Cup 12 months ago.

Juventus ace Khedira is taking nothing for granted, however, as he is full of respect for a Mexico side looking to advance through to the knockout stages of the World Cup for the seventh tournament in a row.

Khedira told the official website of the German Football Association (DFB): “They play great football, they’re an aggressive team; the word “tricky” sums it up.

“We definitely shouldn’t underestimate them even if we did beat them convincingly in the Confederations Cup last year.”

Germany, who claimed glory at the 2014 World Cup by beating Argentina in the final, are looking to become only the third nation to successfully retain their crown and they are priced at 5.50 to achieve that feat.

Khedira, who was part of the successful squad in Brazil four years ago, believes it will be harder for Germany to win the tournament this time around, as teams will have an extra incentive to beat the reigning champions.

“The lads who we’re playing against will run that extra mile against us, the World Cup holders, they’ll be more aggressive and more motivated,” Khedira added.

“If we let up in any way we’ll get beaten, but, as I said, we have a team full of champions. We need to give even more than in 2014 in order to win it again.”