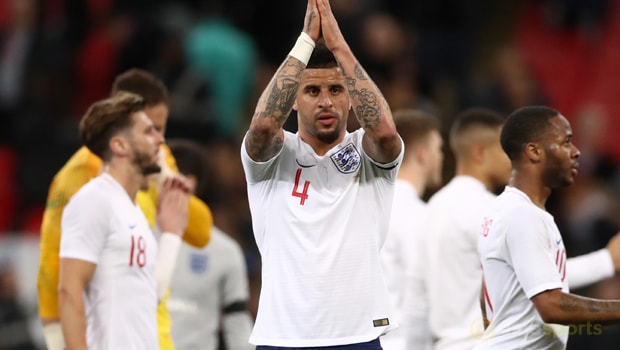 England’s Kyle Walker says his side can prove their doubters wrong at the 2018 World Cup as they prepare to impress under coach Gareth Southgate.

The Three Lions have been drawn in Group G for the World Cup in Russia and they will play Tunisia, Panama and Belgium.

Walker is set to play a huge role in the tournament with Southgate happy to use him at either right-back or centre-back.

The Manchester City star is still on a high after winning the Premier League title for the first time but he believes England could pull off a few shocks this summer.

England were left embarrassed at Euro 2016 after losing to Iceland but Walker insists his team have learned their lessons.

He told the Daily Mirror: “Iceland was a negative. But I feel this England team has made huge steps in the right direction to be where we want to be.

“I think the whole vibe around the place now is completely ­different. The players that we have are exciting and young. We just have to go there and don’t fear anything because there’s nothing to fear.

“I feel if we can just control the game a lot better, which we are working on in training, we will have a good tournament.

“People say we aren’t streetwise compared to other countries, but that’s us as English people. We are very honest.

We will run for 90-odd minutes and sometimes you need to say, ‘OK, let’s pull the reins back a bit, let’s control the game with our ­passing and keep the ball’.

“If the crowd are getting on us and booing us, don’t worry about it. We must believe in us, as a set of ­players, believe in the manager and believe in what we are trying to do and achieve.”