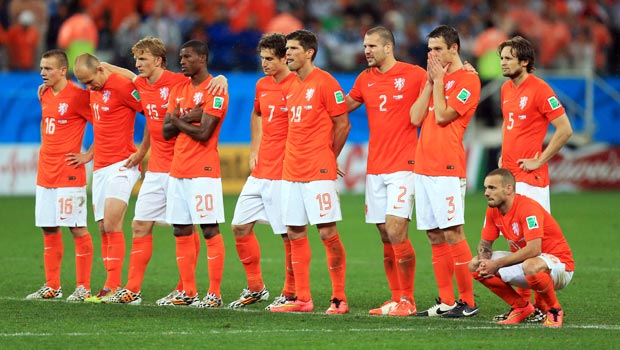 Netherlands coach Louis Van Gaal has revealed two players refused to take the first penalty after his side were dumped out of the World Cup via a shootout by Argentina.

After a goalless 120 minutes on Wednesday, the Netherlands came undone as Argentina claimed a 4-2 win on penalties, with Ron Vlaar and Wesley Sneijder missing for the Dutch.

“I asked two players to take the first ball before ending up with Vlaar,” said Van Gaal. “I thought he was the best player on the pitch so should have confidence.”

“It just goes to show it’s not easy scoring in a shootout.”

He added: “It’s the most terrible scenario, to lose on penalties. At the very least we were equal with them, if not the better team. It’s a big disappointment.”

The Netherlands had beaten Costa Rica on penalties in the previous round, where Van Gaal made World Cup history by replacing keeper Jasper Cillessen with Tim Krul just before the shootout began. The manager could not do the same against Argentina as he had already made all three available changes.

The Netherlands will now contest the third and fourth place play-off with fellow losing semi-finalists Brazil but Van Gaal admits he is not relishing the prospect of Saturday’s fixture, which will be his last game as the country’s manager as he is set to join Manchester United after the World Cup.

He added: “In a tournament you shouldn’t have players play a match for third or fourth place.

“There’s only one award that counts, and that’s being world champion.”