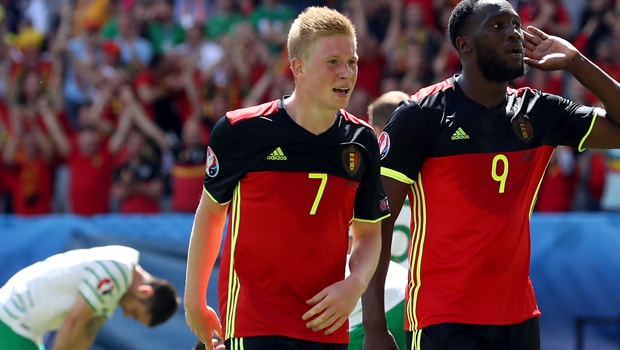 Belgium star Kevin De Bruyne insists his team are much ‘calmer’ now than in previous tournaments as they look to live up to their potential.

Roberto Martinez’s men are considered one of the favourites for the tournament, despite their disappointing results in previous major tournaments.

The Red Devils were knocked out of the 2014 World Cup and 2016 European Championships in the quarter-finals but the majority of their ‘golden generation’ still remain.

The pressure is on this summer with the likes of Thibaut Courtois, Toby Alderweireld, De Bruyne, Eden Hazard, Dries Mertens and Romelu Lukaku in their squad.

However, De Bruyne insists his team are relaxed and ready to prove their class in Russia.

He told reporters: “We are more calm. Brazil (2014 World Cup) was totally new.

The European Championship was also something different. “The guys have experience already and know you don’t have to be great in the beginning.

It’s all about growing as a team and you need a little bit of luck. The circumstances need to be right.

“It’s just look at the next game, be calm and see what’s going to happen.”

Belgium’s final group match is against England on Thursday, but both teams have already qualified for the knockout stages.

Victories over Tunisia and Panama have set them up for a final decider, with both teams looking to finish top of Group G heading into the last 16.