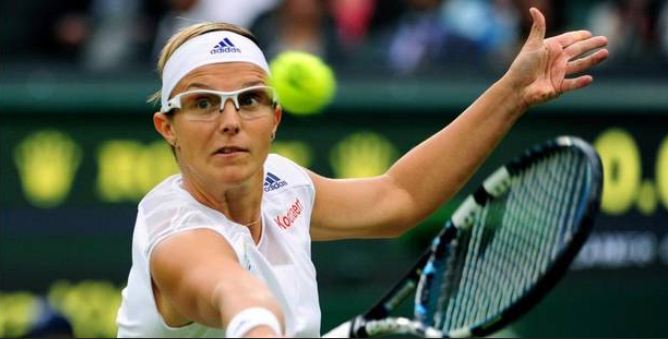 Wimbledon will have a new ladies champion this year after Kirsten Flipkens booked her place in the last four by defeating Petra Kvitova.

2011 champion Kvitova looked on course to make the semis after taking the first set 6-4 but Flipkens came roaring back to take the next two,

It capped a remarkable career turnaround for the Belgian, who last year failed to qualify for Wimbledon and then spent a spell on the sidelines with blood clots in her calf.

“It’s amazing,” she revealed. “(It’s) more than a dream come true to be in the semi-finals of a grand slam, it’s ridiculous.”

Flipkens, who is the outsider of the four semi-finalists, will now meet Bartoli after she beat Sloane Stephens 6-4 7-5 in a rain-delayed quarter-final.

Bartoli has had injury problems of her own this season and is delighted to have made it to the semi-finals after also battling with illness in the lead up to the tournament.

“Tennis is kind of a crazy game, and now I am playing Kirsten Flipkens to be in the final of Wimbledon,” she revealed. “So it’s very unexpected, but that’s also the magic of it.”

Last year’s beaten finalist Agnieszka Radwanska remains on course to make the final again after battling to a 7-6 (7-5) 4-6 6-2 victory over Li Na.

There are doubts over Radwanska’s fitness as she needed treatment on a thigh problem and will need to be at her best to beat tournament favourite Sabine Lisicki in the semi-final.

Lisicki, who defeated Serena Williams in the previous round, was again too good for Kaia Kanepi on Court One when wrapping up a 6-3 6-3 win.