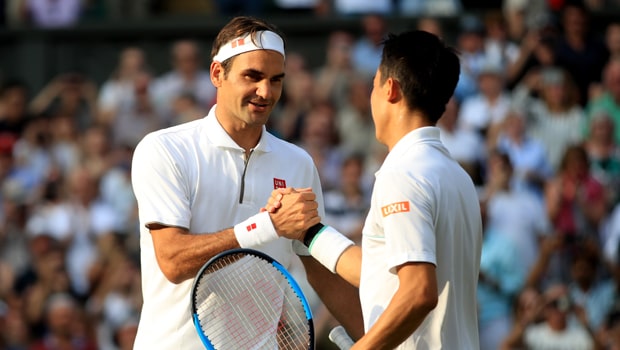 Roger Federer is expecting a tough Wimbledon semi-final clash with a much-improved Rafael Nadal on Friday.

The Swiss ace booked his spot in the last four with a four-set victory against Japan’s Kei Nishikori, while Nadal was a straight-sets winner over Sam Querrey of the USA. It throws together two of the legends of the sport, with 38 Grand Slams between them and 10 titles at SW19.

Federer has eight of those but lost to the Spaniard the last time they squared off at the All England Club – in an epic 2008 final. A lot of water has passed under the bridge since although Federer feels the Majorcan is now a better grass-court player than 11 years ago.

“He has improved so much over the years on this surface. He’s playing also very different than he used to,” he said.

“We haven’t played each other in a long, long time on this surface. He’s serving way different. I remember back in the day how he used to serve, and now how much bigger he’s serving, how much faster he finishes points.”

Nadal is favourite at 1.67 to advance to the final, with Federer on offer at 2.15, and it has all the makings of another classic.

The 2008 match was one of the best finals ever witnessed on the hallowed west London turf and left-handed clay-court specialist Nadal is relishing the opportunity to take on a Wimbledon legend.