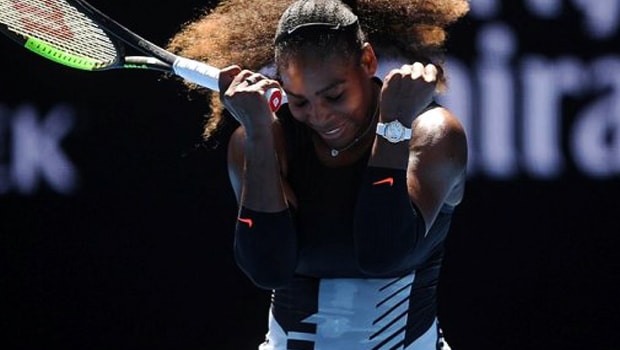 Serena Williams felt she had controlled her temper well after easing past ninth seed Johanna Konta to reach the Australian Open semi-finals.

The American, 35, is hoping to leave Melbourne this weekend with her 23rd Open-era Grand Slam title, surpassing the record held by Steffi Graf if she does.

Konta hadn’t dropped a set in winning her previous nine matches but Williams disposed of the challenger 6-2 6-3 and will next play unseeded Croat Mirjana Lucic-Baroni, who beat fifth seed Czech Karolina Pliskova 6-4 3-6 6-4.

Williams, six-times winner of the Australian Open and most recently in 2015, paid tribute to the form of her younger opponent afterwards.

She feels Konta’s time to shine on the big stage will soon come and she admitted her own serve had been a source of frustration during the match on the Rod Laver Arena court.

“Johanna Konta has been playing so well,” said the second seed.

“I was in the locker room watching her clean up her matches. She is a future champion here for sure, so I am pleased to get through this.

“I got a little frustrated with my serve, but I told myself ‘don’t get Babyrena’ [Williams’ angry alter-ego] and focused on enjoying myself out here.

Today I felt I can do this, it is such a great opportunity for me.”

Having narrowly missed out on the feted ‘Serena Slam’ in 2015 when she won three Grand Slams on the trot before losing in the US Open semi-final, Williams earned her only slam of 2016 at Wimbledon last summer to move on terms with Graf’s modern record.

Williams is 1.36 to win the Australian Open while older sister Venus is 10.00 to triumph ahead of her semi-final with Coco Vandeweghe.