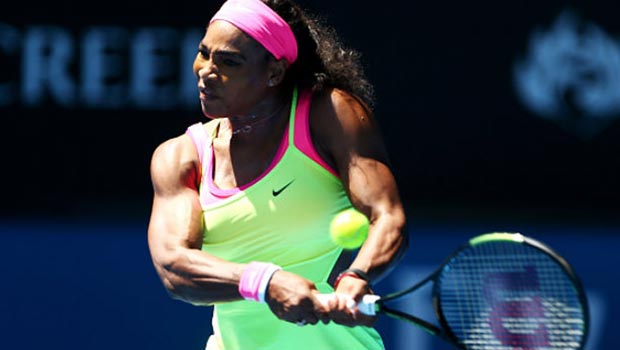 Serena Williams has defied illness to beat Spain’s Garbine Muguruza and reach the quarter-finals of the Australian Open.

The 33-year-old, who has won the season-opening Grand Slam on five occasions but not since 2010, needed three sets to see off Muguruza.

The Venezuela-born 21-year-old beat Williams at last year’s French Open and was on course for a repeat after taking the opening set 6-2 in Melbourne.

Williams fought back to take the second 6-3 and then dug deep when Muguruza wasted six chances to break in a game of eight deuces at 1-1 in the deciding set, with the veteran eventually defying a coughing fit to win the third set 6-2.

“I’ve just been sick. I’ve been fighting it with vitamin C and all kinds of stuff,” said Williams. “But I just have a really bad cough.”

Williams will now take on Slovakia’s Dominika Cibulkova who was too strong for two-time champion Victoria Azarenka, winning 6-2 3-6 6-3.

The Swiss star will now take on Japan’s Kei Nishikori in the last eight after he beat Spain’s David Ferrer 6-3 6-3 6-3.

Wawrinka said: “I am happy to get through after three hours. It was a good level and it’s good to make one more round.

“We have already played a big match at the French Open and it’s always tough to play him, he plays with a good rhythm and he puts a lot of pressure on you from the baseline, but I served well.”

Wawrinka won last season Australian Open after beating Rafael Nadal 6-3 6-2 3-6 6-3 although the Spaniard was hampered by a back injury during the final at Melbourne Park.