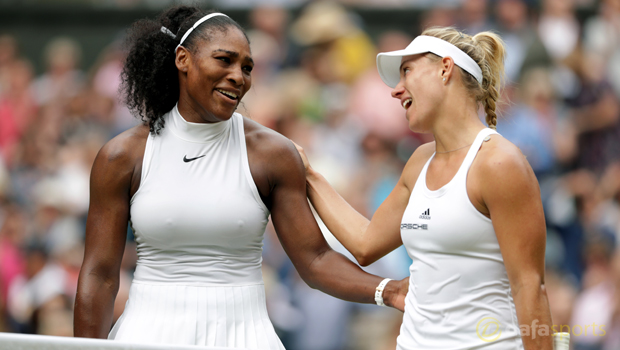 Serena Williams and Angelique Kerber have been confirmed as the first two qualifiers for this season’s WTA Finals in Singapore.

World number one Williams has won the end-of-season event on five previous occasions although she was forced to miss the tournament last year due to a heel injury.

The American has only played in six events during 2016 but has already secured her place in Singapore, thanks largely to her victory at Wimbledon earlier this year, where she beat Kerber in the final.

The 34-year-old, who will be looking to equal Steffi Graf’s Open-era record of 22 major titles when she plays at the upcoming US Open, admits she is delighted to have already qualified for another Tour Finals.

German ace Kerber is also assured of her place, despite her recent defeat to Karolina Pliskova in the final of the Cincinnati Masters, a result that cost her top spot in the world rankings.

The 28-year-old, who claimed her first Grand Slam title at the Australian Open earlier this year, will be making her fourth appearance at the Tour Finals and is relishing the challenge ahead.

“It is one of the most important events of the year and we all fight to qualify in the top eight,”

Germany’s Kerber said in a statement released by the WTA.

“I have great memories from my other experiences at the tournament and I hope to play some great matches and win the title.”

The event is scheduled to take place at the Singapore Indoor Stadium in October.