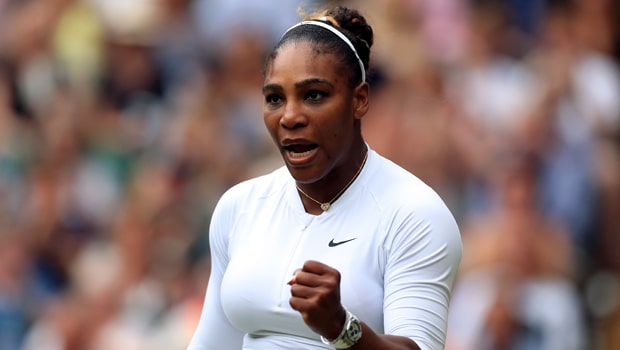 Serena Williams felt her Wimbledon quarter-final win over Alison Riske was a sure sign of the progress in her game over recent weeks.

The 23-time Grand Slam winner is building momentum after returning from the sidelines and felt she was able to battle past compatriot Riske in a way that she might not have been able to just a few weeks previously.

Williams saw off Riske 6-4 4-6 6-3 to set up a last-four meeting with Czech Barbora Strycova, who defeated Britain’s Johanna Konta in straight sets. The American is chasing an eighth Wimbledon title but her first Grand Slam success since January 2017 and, despite plenty of errors, she was content with the victory.

“It was really satisfying,” the 37-year-old said. “I wouldn’t have won that match a couple of weeks ago. “I’m glad I was able to come through. She was honestly playing amazing, she beat so many great players. “I was really pumped, it was for a place in the semis at Wimbledon and that doesn’t happen every day. It’s a long, arduous road.”

Seventh seed Simona Halep is also through to the semi-finals for the first time since 2014 after a 7-6 (7-4) 6-1 victory over China’s Zhang Shuai. Halep, 27, is the highest seed left in the women’s singles and the Romanian will face eighth-seeded Ukrainian Elina Svitolina, a 7-5 6-4 winner over Karolina Muchova, for a place in the SW19 final.

“It feels amazing. It is the first semi-final for me, and I actually didn’t expect it to happen here. It is exciting and I am looking forward to it already,” Svitolina said following her success.

Williams is favourite for Wimbledon glory at 2.10, with Halep priced at 2.75. Svitolina can be backed at 6.50 while Strycova is the outsider of the four at 10.00 to lift the trophy.