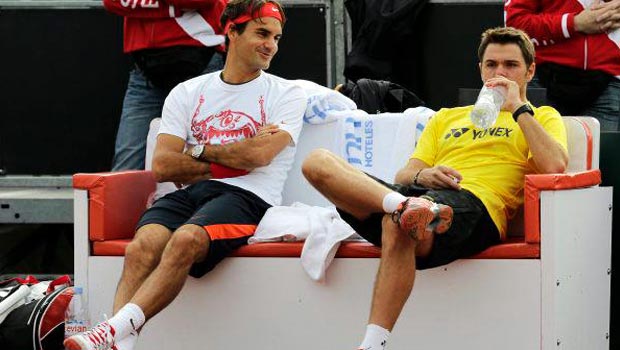 Roger Federer admits Switzerland are the favourites to reach the Davis Cup final as he prepares to team up with Stan Wawrinka in this weekend’s semi-final tie against Italy in Geneva.

Federer quickly switched his focus to the Davis Cup after losing in the US Open semi-finals to Marin Cilic last week as he goes in search of the one major tennis title that has eluded his grasp since turning professional.

Likewise, Switzerland have never won the Cup, coming close in 1992 when losing to a strong US team that included Andre Agassi and Jim Courier, but Federer is confident going into the last-four clash.

“Obviously I think we are the favourites, which is always a nice feeling to be. So 18,000 people in Switzerland is something very special,” he said.

“I think it’s going to be record crowd for Swiss. I think people are quite excited to come see Stan and myself play, regardless of who it is against.

“We have a formidable team. We are playing at home and we chose the surface. We can do it.”

Along with Federer and Wawrinka, Marco Chiudinelli and Michael Lammer complete the Swiss team – 1.57 favourites to lift the Cup – which has never lost to Italy at home.

The Italian team – available to back at 15.00 in the Davis Cup (winner) market – includes Fabio Fognini and Andreas Seppi.

Tomas Berdych will open against Richard Gasquet in the opening rubber before Jo-Wilfried Tsonga meets Lukas Rosol at Roland Garros, home of the French Open.

The doubles on Saturday will match French duo Julien Benneteau and Gael Monfils against Radek Stepanek and Jiri Vesely. The reverse singles are on Sunday.

France are 4.50 to win the Davis Cup while the holders can be backed at 5.00 – suggesting that their semi-final will be a very tight contest.