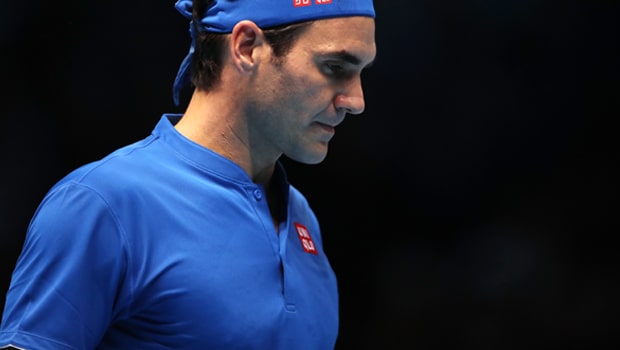 Six-time champion Roger Federer continued his recent upturn in form as he beat Kevin Anderson to secure his place in the semi-finals of the ATP Finals for the 15th time.

The Swiss ace looked to be struggling for confidence when he played his first match of the tournament and lost to Japan’s Kei Nishikori.

However, the 37-year-old responded perfectly by beating Dominic Thiem before dispatching of Anderson on Thursday night.

His win means he boosts his chances of avoiding world number one Novak Djokovic in the last four in London.

Anderson had already won two matches to reach the final four, while Djokovic advanced earlier in the week.

Alexander Zverev, John Isner and Marin Cilic are battling for the other semi-final berth but Federer is confident he has found his groove.

“I’m very happy, my first match was tough and I never got going, but with my back against the wall maybe it’s easier for me to play,” said Federer.

“Kevin’s had a great year, but it’s been a fun group and I’m very happy to be in the semis.

“These round-robin formats are not straightforward, we’re used to it being you lose, you leave, you don’t hang around.

Maybe it was difficult for Kevin having already qualified, whereas with Thiem winning it was maybe easier for me.

“But I’m happy I’m still alive and hope I can play a good match the day after tomorrow.”

Federer is starting to find his feet in London and he remains 4.50 to lift the trophy this month.