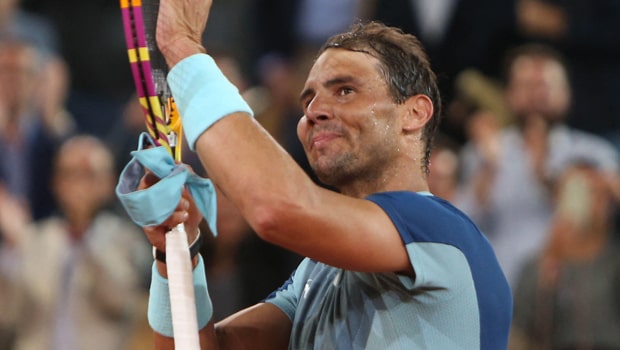 After spending almost six weeks on the sidelines due to a stress fracture in his rib, Rafael Nadal made a winning return in the second round of the Mutua Madrid Open. The Spaniard defeated Serbian Miomir Kecmanovic 6-1, 7-6(4) to reach the third round of the tournament.

The first set was easy for Nadal as he won by 6-1 in 36 minutes but he had to toil hard in the second set as Kecmanovic was able to take it to the tiebreaker. Nadal feels he played at a good level against a tough opponent, who has been playing well in the recent past.

“Every comeback is different. We had to put all circumstances together to analyze every single comeback, and today has been a very important match for me, playing at home on clay against a player that has been playing well for the past couple of months,” Nadal said in his post-match press conference.

“So [if you] put everything together [it is] a very tough first round,” Nadal added. “I think I managed it very well. I played at a good level, so [I am] very pleased with the victory. I just try to stay humble to know things [are] not going to be perfect here and just moving forward with the right determination, to accept that I need to fight, I need to stay positive. I need to play with the right attitude, and take every single match that I’m able to win like a present to play another time here.”

Meanwhile, Nadal will be looking to clinch his sixth title in Madrid and if he goes all the way, this will be his 37th ATP Masters 1000 title, which will help him level with Novak Djokovic.

Nadal extended his season record to 21-1 and he will look to continue the good show. The Spaniard will face David Goffin in the third round of the tournament.

Nadal will aim to continue his good run in the upcoming matches and he could meet Novak Djokovic in the quarterfinals.