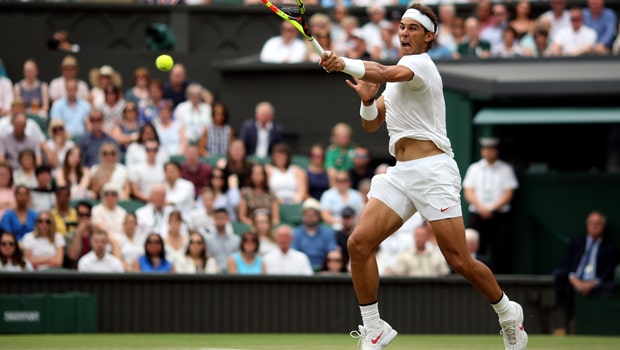 Rafael Nadal claimed his first title of the year by defeating world number one Novak Djokovic 6-0 4-6 6-1 in the Italian Open final in Rome on Sunday.

The Spaniard had lost to Djokovic in the Australian Open decider earlier this year and will count his Italian success as a timely boost ahead of the second Grand Slam of the season in Paris.

Nadal’s first set demolition job, which took him 39 minutes, was the first 6-0 between the great rivals in 141 previous sets.

Dominant all week, Nadal had his service broken just twice in the tournament, holding in 41 of his 43 service games and saving 13 of the 15 break points he faced as he won the title for the ninth time. With the win he claimed his 81st tournament win and it takes him 34-33 ahead of Djokovic in Masters 1,000 Series titles.

As he targets a remarkable 12th crown at Roland Garros, Nadal conceded it was good to boost his confidence and know he still has the traits to be the dominant force on clay.

“Then with the feeling that I am improving. I know if I’m able to reach my level you can win, you can lose, but normally I’m going to have my chances, especially on this surface.”

For Djokovic, there was some relief that he forced the match into three sets having been blitzed in the opener but the Serb had no complaints about the overall outcome.

“I’m really glad that I managed to get into the third set, considering the first set where I was blown away from the court. Obviously third set was not much different from the first,” Djokovic said.

“I don’t want to talk about fatigue or things like that – Rafa was simply too strong.”

Nadal is 1.95 to win the French Open, with Djokovic 3.25 in his quest to hold all four Grand Slam crowns.