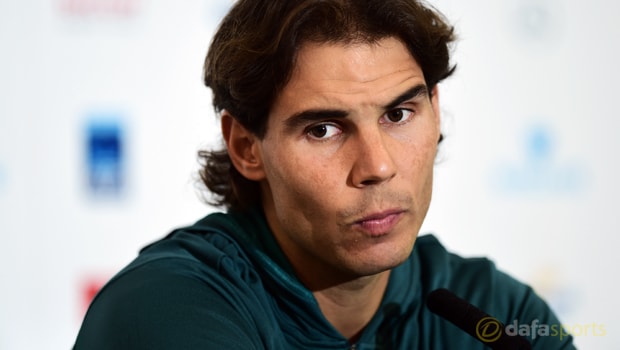 Rafael Nadal says he is happy to be patient as he continues to plan his return to the top level of tennis.

After being plagued by injuries for the last few years, fitness woes again curtailed the Spaniard’s plans in 2016 and he eventually called time on his campaign in October after the Shanghai Masters.

Before that he had won in both Monaco and Barcelona, but was forced to withdraw from the French Open and miss Wimbledon due to a wrist injury.

He did return in time to play through the pain and win doubles gold alongside Marc Lopez at the Rio Olympics, but his diminishing results meant the decision he made in October seemed almost inevitable.

The 30-year-old has since returned to the practice court and has set about making plans for the new season, with Nadal due to compete later this month at the Mubadala World Tennis Championships.

He will then play in Brisbane before the first Grand Slam of the year, January’s Australian Open, which he is 23.00 to win, with Novak Djokovic the current 2.40 favourite.

Nadal admits he has been encouraged by his progress but says he is happy to wait for the results to come if it allows him to stay largely injury-free in 2017.

He told Tennis World USA: “I’m practicing much, I am in the middle of the pre-season and at the moment everything is going well. I am willing to work and so far I manage to do it.

“You never know how things can go. I have to see how I feel and how I am doing after this month and a half of preparation, and then we will decide. In tennis you decide which tournaments to play depending by how things go.”