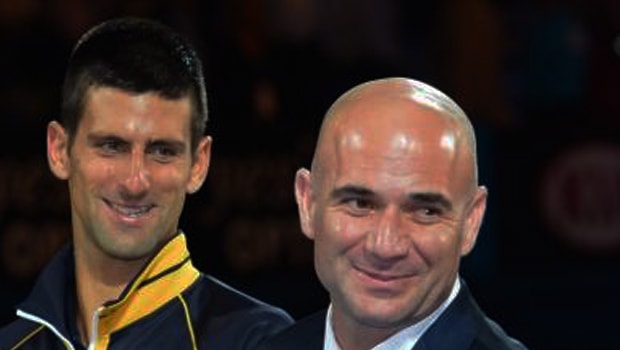 Novak Djokovic refused to deny suggestions that Andre Agassi is set to become his new coach after winning his first match since splitting with his backroom team.

The world No 2 defeated Nicolas Almagro 6-1 4-6 7-5 in the second round at the Madrid Open having announced this week that he was ending working relationships with coach Marian Vajda, fitness coach Gebhard Phil Gritsch, and physiotherapist Miljan Amanovic.

The Serb says he could have a new coach in place ahead of the French Open in Paris but, if not, he expects to have something sorted very soon after the season’s second Grand Slam tournament.

“It’s the first match without my team that’s been with me for 10 years,” said Djokovic having beaten Almagro.

Speculation has been rife that Agassi will step in as Djokovic’s new coach, a role that was previously held by Boris Becker until the German’s departure in December.

Becker was a six-time Grand Slam champion in his own right and Djokovic says he wants someone of that ilk in his corner again.

While unwilling to speculate that it would be Agassi, Djokovic said that he understands why the seven-time Grand Slam-winning American is being mentioned.

“I would like to have ideally someone who fits into the profile of a person that was kind of in my shoes before, that has been winning Grand Slams,” he added.

“There are not too many of those kind of champions in the history of the sport. I guess it’s normal that people start coming up with names. I can’t talk more than that.”

Djokovic is 4.20 to win the French Open in Paris next month, while Rafael Nadal is 2.25.