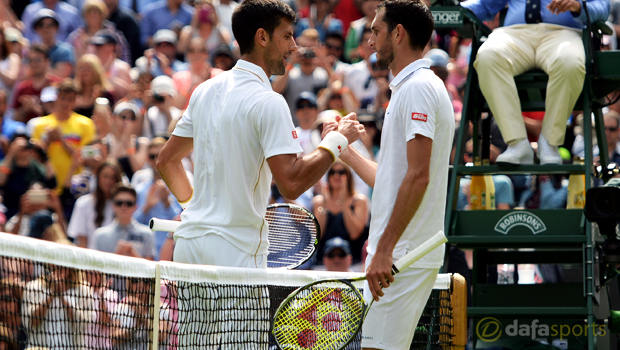 Novak Djokovic admits he was encouraged by his fine start to Wimbledon on Monday as he cruised past Britain’s James Ward in straight sets.

The world number one is looking to become only the second man to win five straight Grand Slam titles after Don Budge achieved the feat between 1937 and 1938.

Djokovic looked in imperious form as he won the first set to love and then raced into a 3-0 lead in the second, playing flawless tennis that Ward simply had no answer for.

The Brit did eventually get on the board but it was not enough as the defending champion claimed a 6-0 7-6 (3) 6-4 win to tie Rod Laver’s Open era record of 29 matches unbeaten in the Slams.

Next up is Adrian Mannarino after the Frenchman ended Kyle Edmund’s hopes with a comfortable 6-2 7-5 6-4 victory.

Although he lost momentum at times on Monday, Djokovic was happy with his start to the tournament, most notably his performance in the opening part of the match.

“I honestly didn’t expect myself to start that well,” said Djokovic.

I knew that the reaction of the crowd, and his own reaction, will be the way it was.

“The first part of the match was almost flawless, so I’m very pleased with the way I started Wimbledon.”

Djokovic is currently the 1.85 favourite to win at SW19 this year, with Andy Murray 5.25 and Roger Federer third in the market at 8.00.